(The content of this page is taken from a now defunct site at: www.gotmus.i.se)

During the decades around the year of our Lord, the border for the vast Roman Empire, called Limes in Latin, was pushed northwards to the natural frontiers of the Rhine and Danube. Around this border, substantial economic, political and cultural contacts were to be established during the ensuing five hundred years.

Contacts between the mighty empires of the Continent and the various tribes in the North resulted in a continuous flow of goods across large geographic areas. The leaders of the ruling classes wanted to acquire tokens of loyalty and allegience both within their own community and from their contacts with external powers. Political and military alliances were manifested by way of gifts and marriage agreements, which would have a unifying effect on the material culture.

Imported luxury goods lying side by side with domestic craftwork were prevelant in graves and hoards throughout the period from the Roman Iron Age to the Merovingian (Vendel) Period. Exotic and inaccessible objects from foreign parts disclose contacts beyond the borders of the domestic community. Simultaneously, the people seem to have been very particular about emphasising their own distinctive character and origins. This could be achieved through domestic prestige objects, with a characteristic Nordic idiom.

The period between 400 and 550 A.D. has been called the Golden Age of the North. During this period the flow of gold to Scandinavia was greater than ever before. The main bulk was probably in the form of Roman gold coins, so-called solidi. These probably represented wages and tributes distributed among Scandinavian leaders or warriors.

In the Roman and Byzantine Empires gold, precious stones and purple were symbols of a high social rank. Amongst the multitude of signs of rank, symbols of loyalty towards a certain leader included gold rings and Roman Emperor medallions.

In Byzantine itself the gold coins circulated within very restricted social circles – in dealings between the state, the army and the large landowners. Of highest prestige were the large gold coins. Emperors used them as gifts to consolidate friendship and alliances. The Roman Emperor medallions even became prototypes for the Germanic gold bracteates.

People in the Nordic chiefdoms were reckoned as belonging to the Germanic tribes. Their knowledge of the power and rank symbols of the Continental empires was gained from the numerous Germanic recruits in the Roman army, and from the Roman practice of enfeoffing various Germanic warrior groups with land in the imperial provinces.

People in the Nordic communities adopted and reshaped various ways of displaying their power and prestige, whose origins in many cases were to be found on the Continent.

The Roman emperor medallions were used as prototypes for the Germanic gold bracteates. The gold bracteates have been unearthed in various places throughout Scandinavia. As time progressed, they underwent an interesting figurative development, from an almost naturalistic portrayal of a human head on the oldest bracteates to a highly stylized animal ornamentation on the most recent ones. The development of the gold bracteates can be divided into four phases, A, B, C and D bracteates.

It would seem that the ornamentation changed according to what was deemed important to express in the environment where the gold bracteates circulated. Characteristics and attributes would appear to have been of greater interest than an actual leader of flesh and blood. The development suggests that the most significant elements were motion and a blurred distinction between man and beast. Maybe it is against this background that we should attempt to decipher the Nordic animal ornamentation.

A study of phases B and C in the development of the gold bracteates indicates a connection between the figures represented, and the various stories in Ancient Nordic mythology. Of particular common occurrence are the figural representations connected with Oden, the highest of the Viking Age gods.

On Gotland, apart from C-bracteates, a number of so-called E-bracteates have been unearthed. They, like the D-bracteates, display a highly stylized animal ornamentation, but they differ from the D-bracteates, as regards style. The E-bracteates are by far the most common bracteate group on Gotland and display a remarkable similarity to the serpent triptych on the picture stone from Smiss in När parish. This motif is also common on a group of round Migration Period brooches from Gotland. The significance of the symbol was probably common knowledge among the contemporary Gotlanders.

The Havor hoard was unearthed during a scientific excavation of Havor Ringfort in Hablingbo Parish in the south of Gotland in 1961. It consisted of a Roman bronze situla, containing a wine ladle and strainer, three bronze ladles inwardly tin-foiled and two bronze bells also of Roman origin.

The most remarkable item, however, was a golden neck ring with a diameter of over 24 cm. It is about 100 years older than the Roman wine service and its place of origin is unknown. It displays similiarities both with the Celtic neck ring type called Torques and neck rings from Southern Russia. It might nevertheless have been produced on Gotland. The size of the ring would suggest that it was not intended for use by any human being, but rather as an attribute of a statue of a god or goddess.

The ladles and strainers were originally intended for use in wine drinking. The original function of the bronze bells is somewhat less certain, but they are a common occurrence in yields from Roman citadels. The bells may have had some ceremonial function in the customs connected with wine drinking. 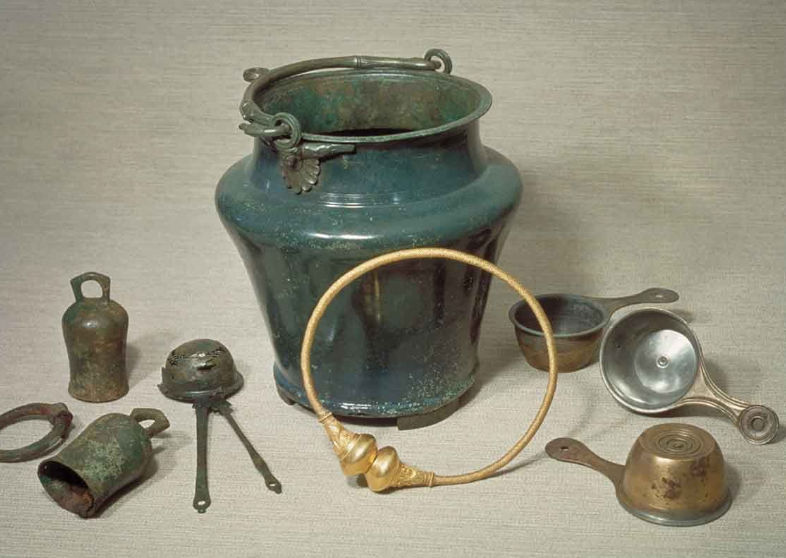