Pont de l’Arche is situated on the left bank at the confluence of the River Seine and the River Eure.

The town of Pont de l’Arche came into existence after a fortification against Viking invaders had built by Charles II (known as Charles le Chauve or Charles the Bald) on the lands of the village of Hasdans (today called les Damps).

“Charles caused all the leading men of his realm to assemble about 1 June, with many workmen and carts, at the place where the Andelle . . . and the Eure . . . flow into the Seine, he closed it off to ships sailing up or down the river. This was done because of the Northmen.”

The labour for this construction came from the lowest level of the Carolingian military hierarchy – the free farmers who were too poor to perform military service in the army.

Pont de l’Arche was intended to be the key to Charles the Bald’s defences for the Seine. The fortified bridge was begun in 862. The bridge was protected by large forts of wood and stone on both sides of the river.

Construction seems to have been slow, and the unfinished bridge was in Viking hands by 865. The work was finally completed c. 870.

The fortifications played a major role in hindering a Viking fleet which entered the Seine in 865 and the success of this action seems to have kept the Vikings away for the next ten years.

The bridge and fortifications were finally destroyed in a Viking raid in 885.

In 1989 limited excavations led by Dr David Hill, David Beard, Brian Dearden and Margaret Worthington disclosed a small part of the defences the of the fortification north of the river.

Two areas of 5m x 5m were opened: one to the east of the road leading from the bridge and one to the west. The locations for the trenches were chosen following a geophysical survey carried out by Brian Dearden.

Trench I, to the west of the road, contained part of the stone footing for the fortifications.

Trench 2, to the east of the road, revealed the edge of the ditch to the fortifications. Unfortunately, owing to the limits imposed by the French authorities, it was not possible to extend the trench to reveal more of this structure.

For further information see Dearden, B. & Clark, A., “Pont-de-l’Arche or Pitres? a location and archaeomagnetic dating for Charles the Bald’s fortifications on the Seine”, Antiquity Vol 64, 1990 pp 567-571 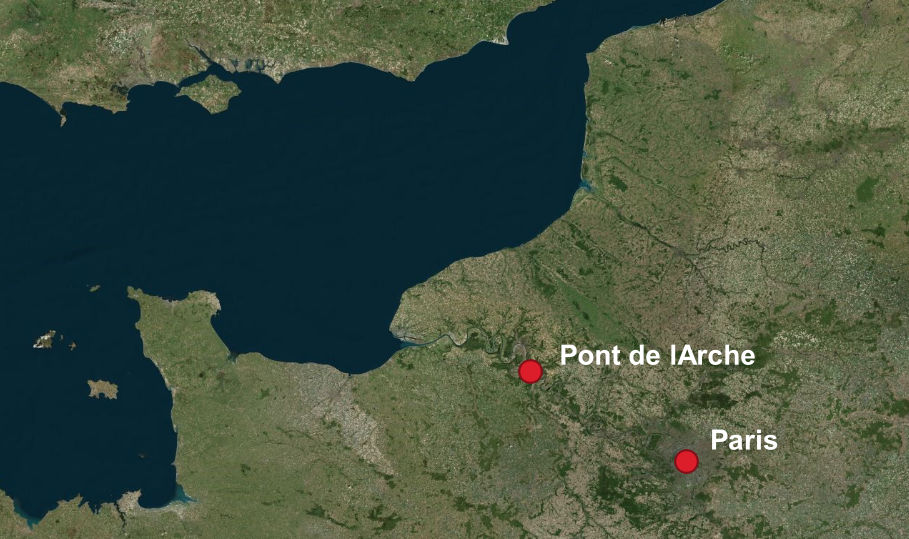 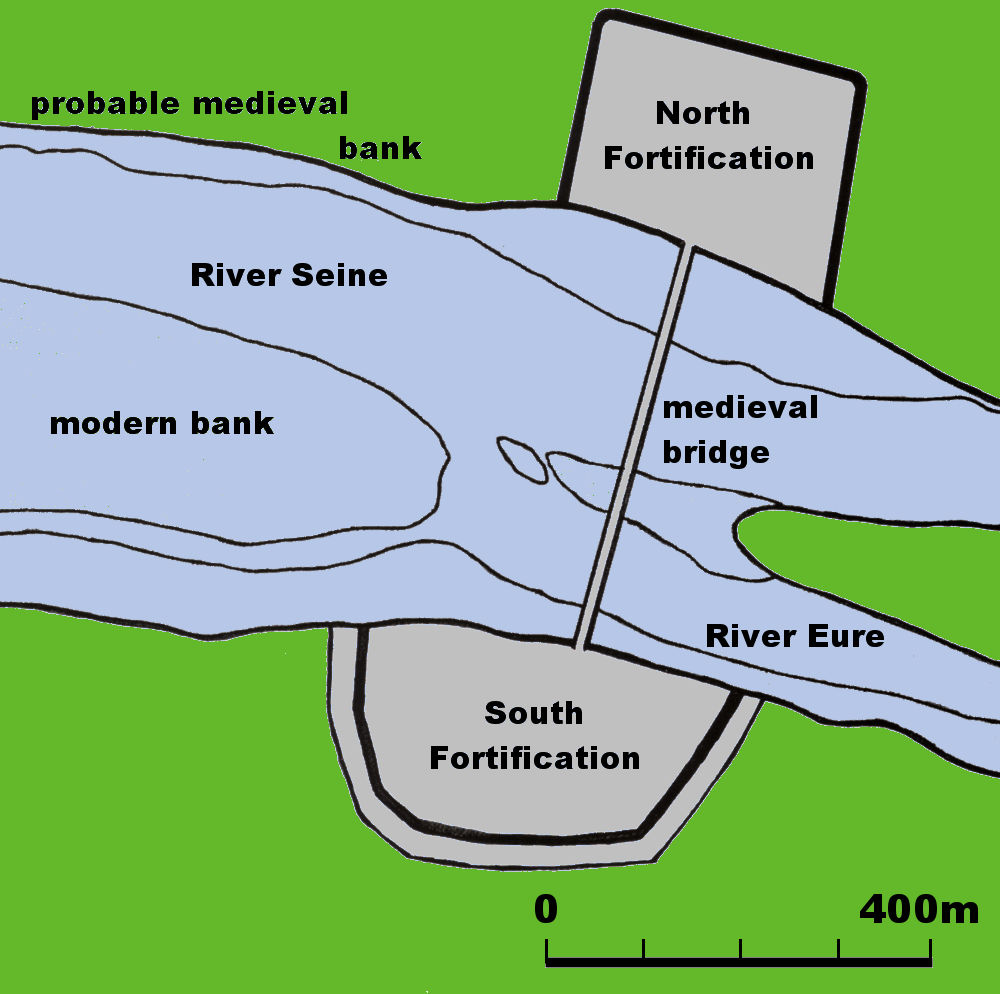 Plan showing the two fortifications and the bridge 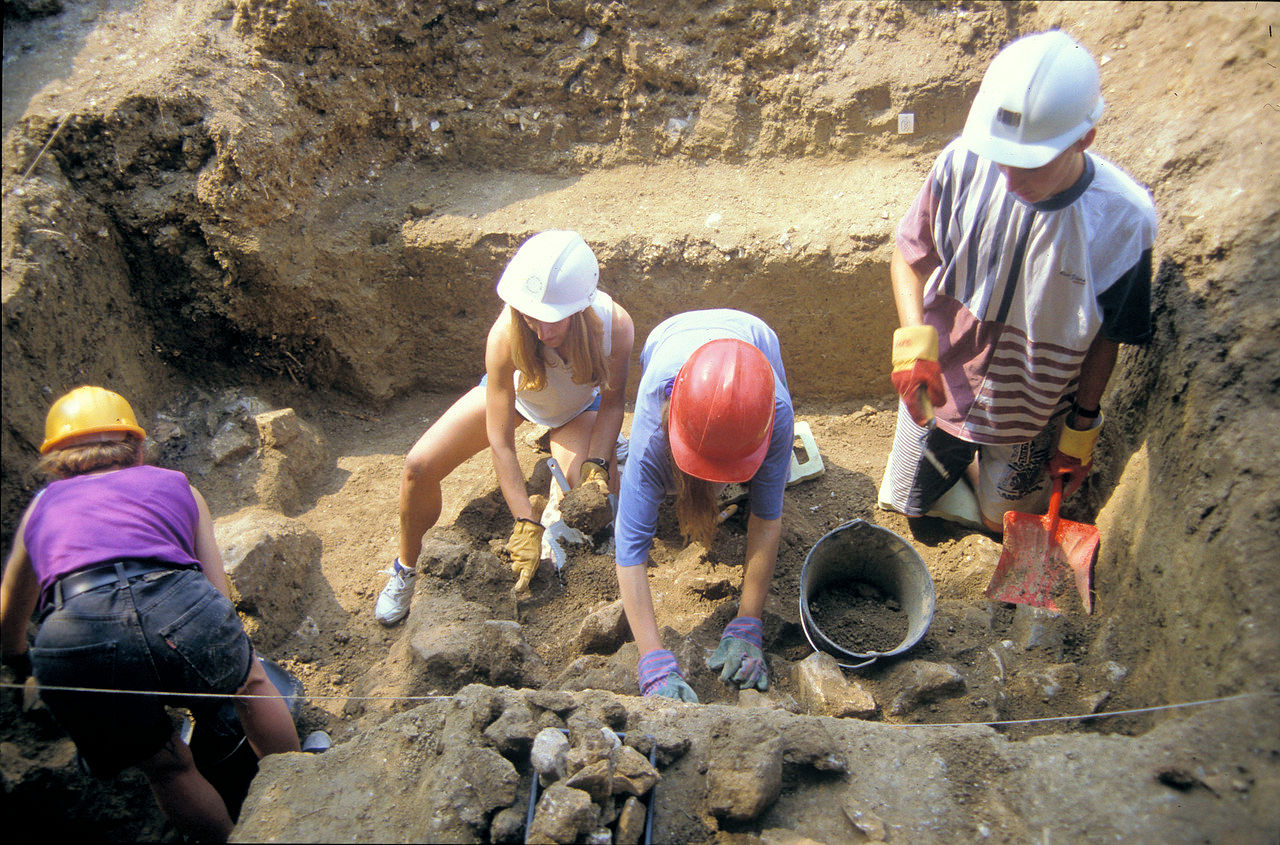 Trench 1 to the west of the road
image: David Beard 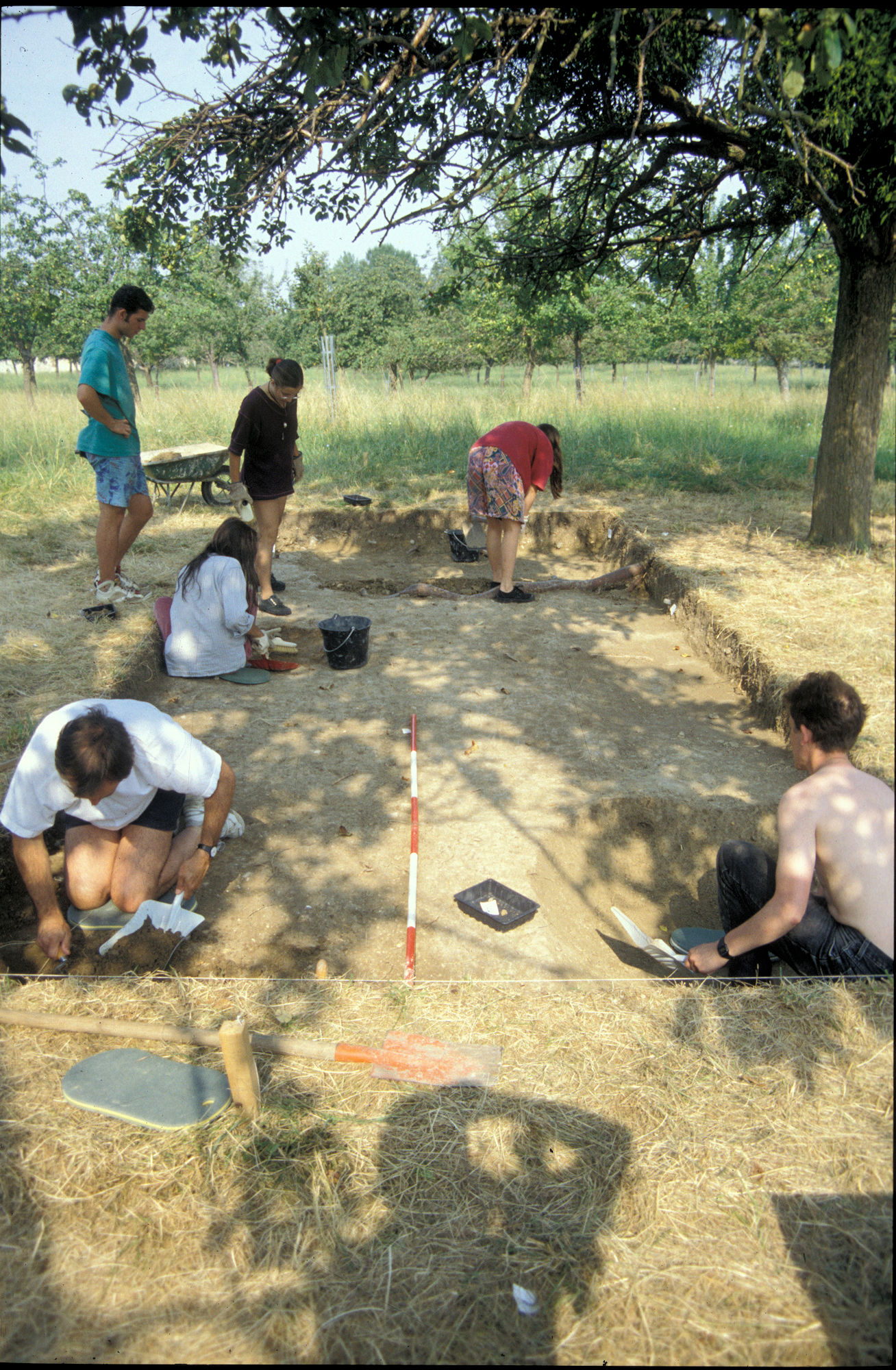 Trench 2 to the east of the road
image: David Beard 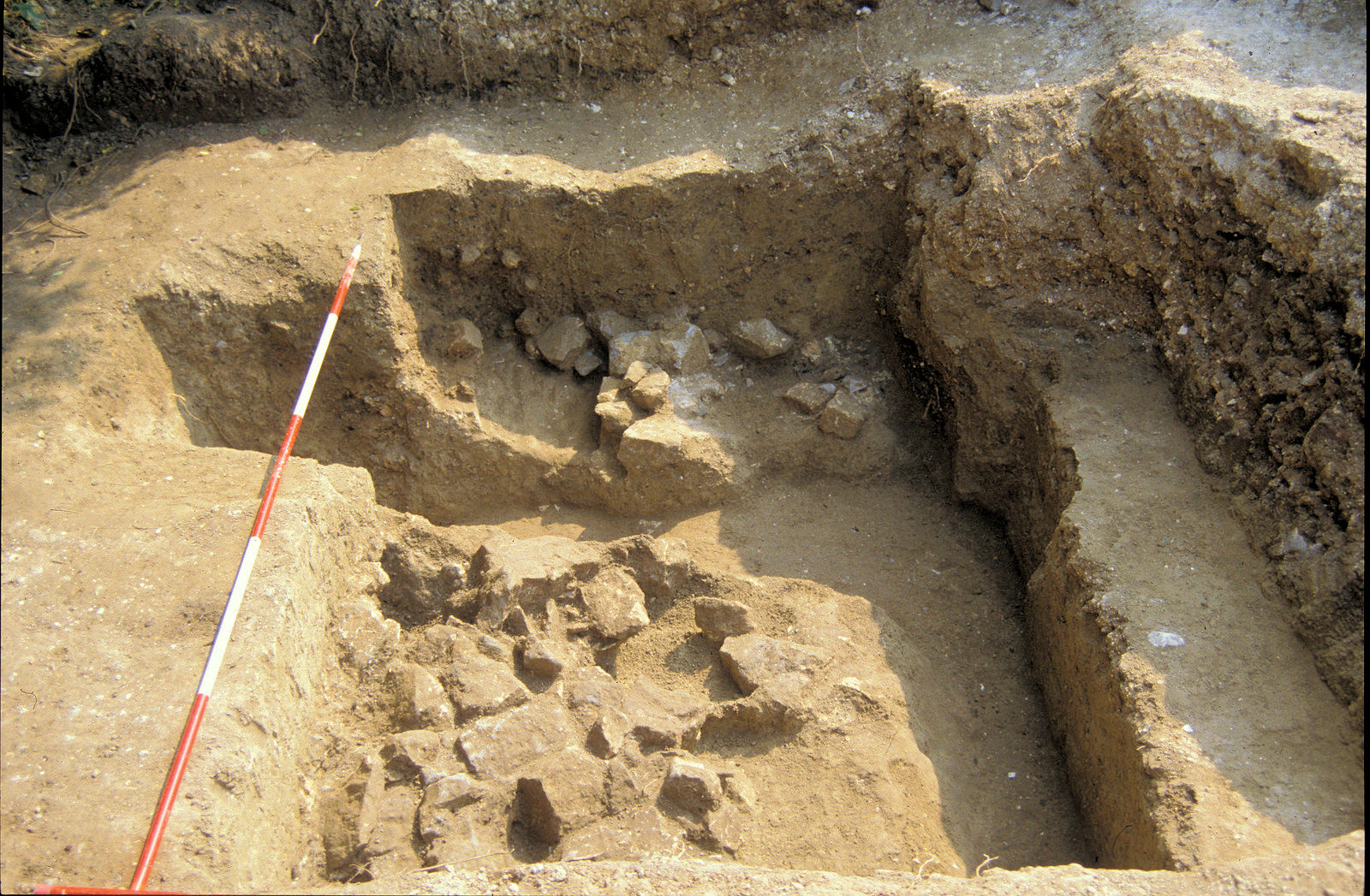 The surviving stone footings of the fortifications in trench 1
image: David Beard 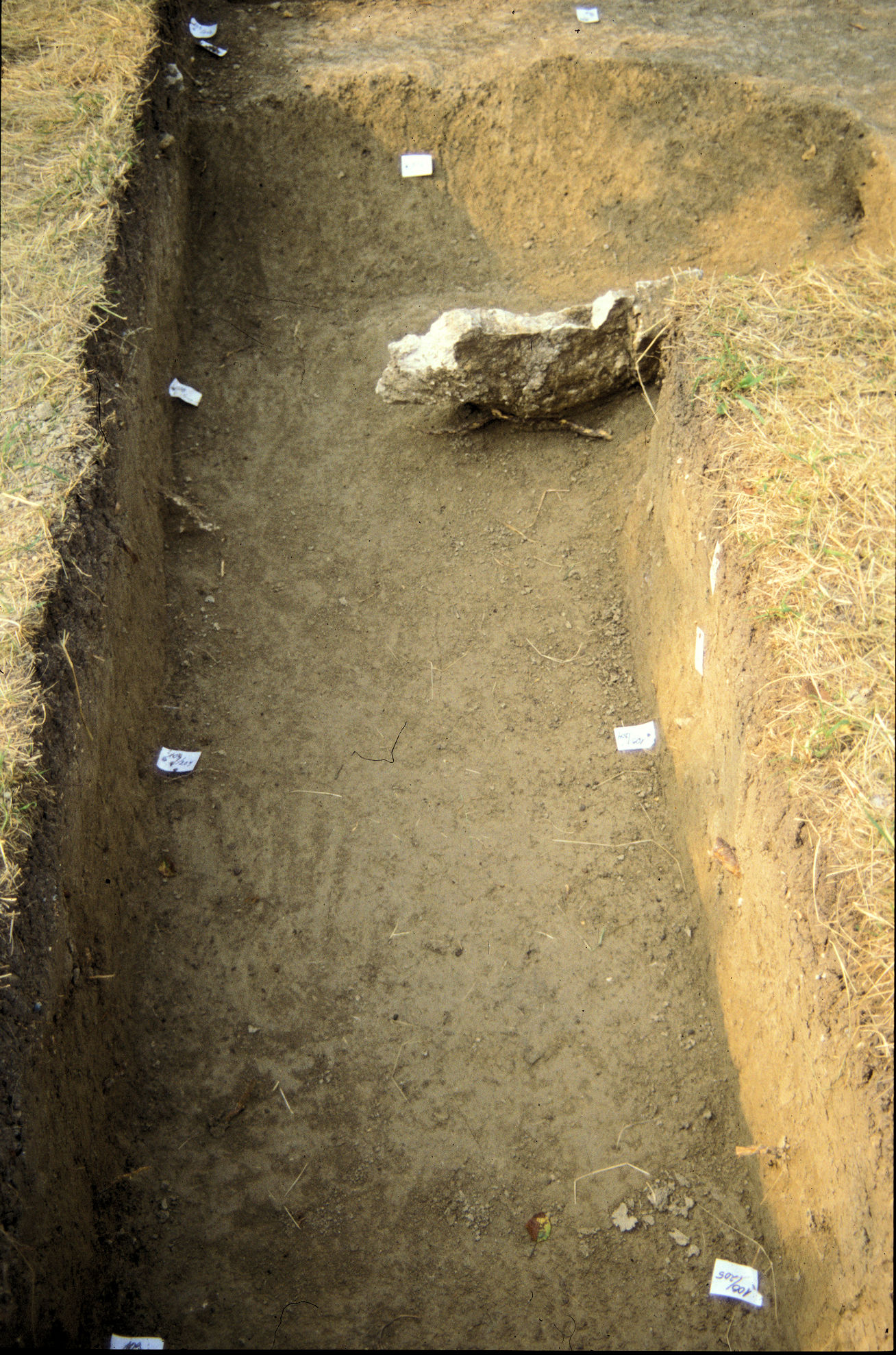 Part of the ditch discovered in trench 2
image: David Beard