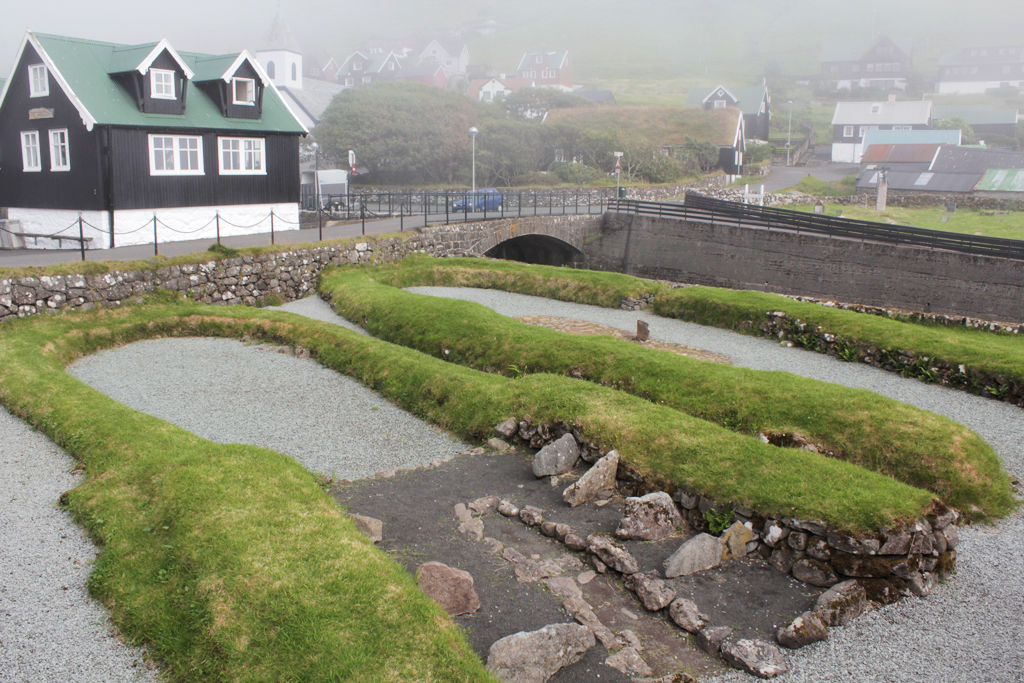 At Kvivik there are the remains of two Viking period buildings. The south side of these buildings has been badly eroded by the sea, but generally the survival is good.

The plan of the buildings and the following description is taken from “The Norse Settlement of the Faroe Isles”, by Sverri Dahl.

On the right is the hall; the building on the left is half cow-house, half barn, with other barns added later. All the Faroese halls, or skdlar, stand close to a stream and all are oriented north-south, the southern gable facing the sea. At Kvivik the sea has unfortunately washed away so much of the coast that the southernmost ends of the buildings have disappeared.

The erosion is partly due to wave action, partly to a general sinking of the land since the Viking Age.

The walls of the Faroese houses are built from an inner and an outer layer of stones and turf, the space between being filled with earth and small stones. These walls are about 150 cm. thick and are preserved to a height of between 50 and 150 cm.

There seems to have been a certain regular ratio between the length and the breadth of houses; the largest so far discovered-the hall at Kvivik-was 2I or 22 m. by 5′ 75 m. internally. Along the inside of the walls were benches, made partly of stone, partly of earth, retained by wooden planks, as is demonstrated by rows of small post-holes. The benches served both as seats and beds. Exactly on the central axis of the hall was the long fireplace, built of flat stones with a roasting pit in the middle. At Kvfvik the pit was round, but it was rectangular at Fuglafjerour. The fireplace at Kvivik was 7 m. long and oval, as the hall was oval. The floors were partly paved with stone and always overlaid by a trodden floor of ash, soot, clay and sand.

At Kvivik there were remains of two rows of posts that held up the roof of the hall which was roofed with straw, birch-bark and turf, traces of which survived; this was probably held in place by long cords twined from juniper branches. Train-oil lamps made of stone and pumice have been found, but there were so few that the long fire must have provided most of the light for indoor work. The main indoor occupation, other than cooking, was spinning on spindles with whorls of soapstone, lead or pumice, and weaving on looms with weights particularly of basalt, but also of soapstone. Pumice is found locally but soapstone was imported either from Norway or Shetland, particularly in the form of ready-made bowls with lines below the rim, some of which had convex bases and incurved necks. The Faroese potters modelled their cooking-vessels on these forms. Part of the diet of those who lived at Kvivik is revealed by finds of the bones of sheep, cows, pigs, seals and pilot whales, guillemots, razor-bills, cormorants, sea-gulls, and, of course, cod. It is uncertain whether they ate horses, but bones tell us that they certainly had them, and we know that they gave toy horses to their children.

Various kinds of wooden vessels had cords of twisted juniper, a material also used for other purposes, e.g. for tying the cows in the stalls and, as already mentioned above, perhaps for keeping roofs in place. As yet the only byre known is that at Kvivik. It has the same curved walls as the hall, and by its size demonstrates that farmsteads of the Viking Age were quite large, at least by Faroese standards. At Kvivik there was room for eight to twelve animals which were stabled in stone-built stalls, 1.6m.-deep, with stone slabs between them. The bones indicate that the animals were of small stature. 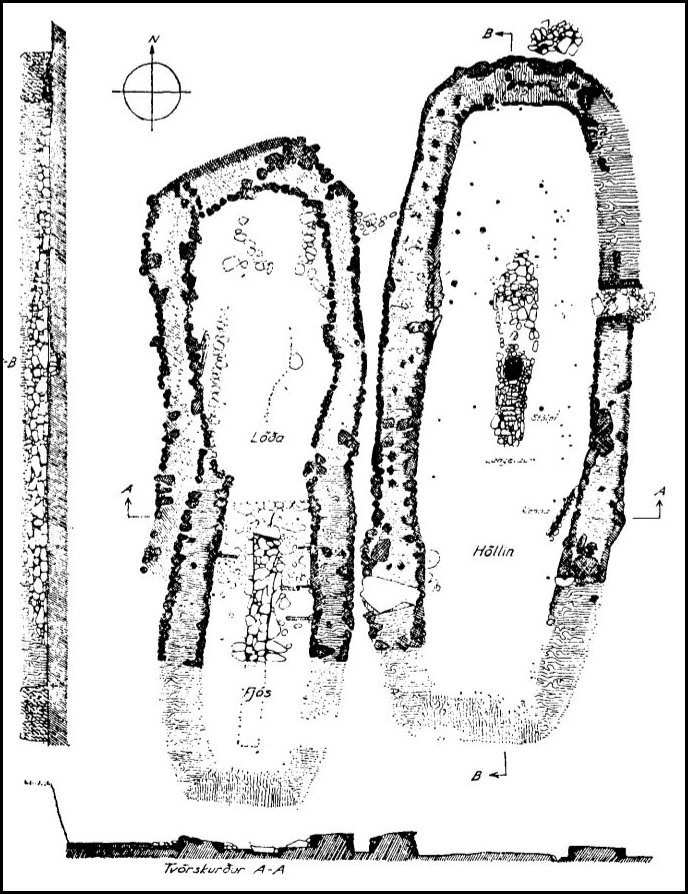