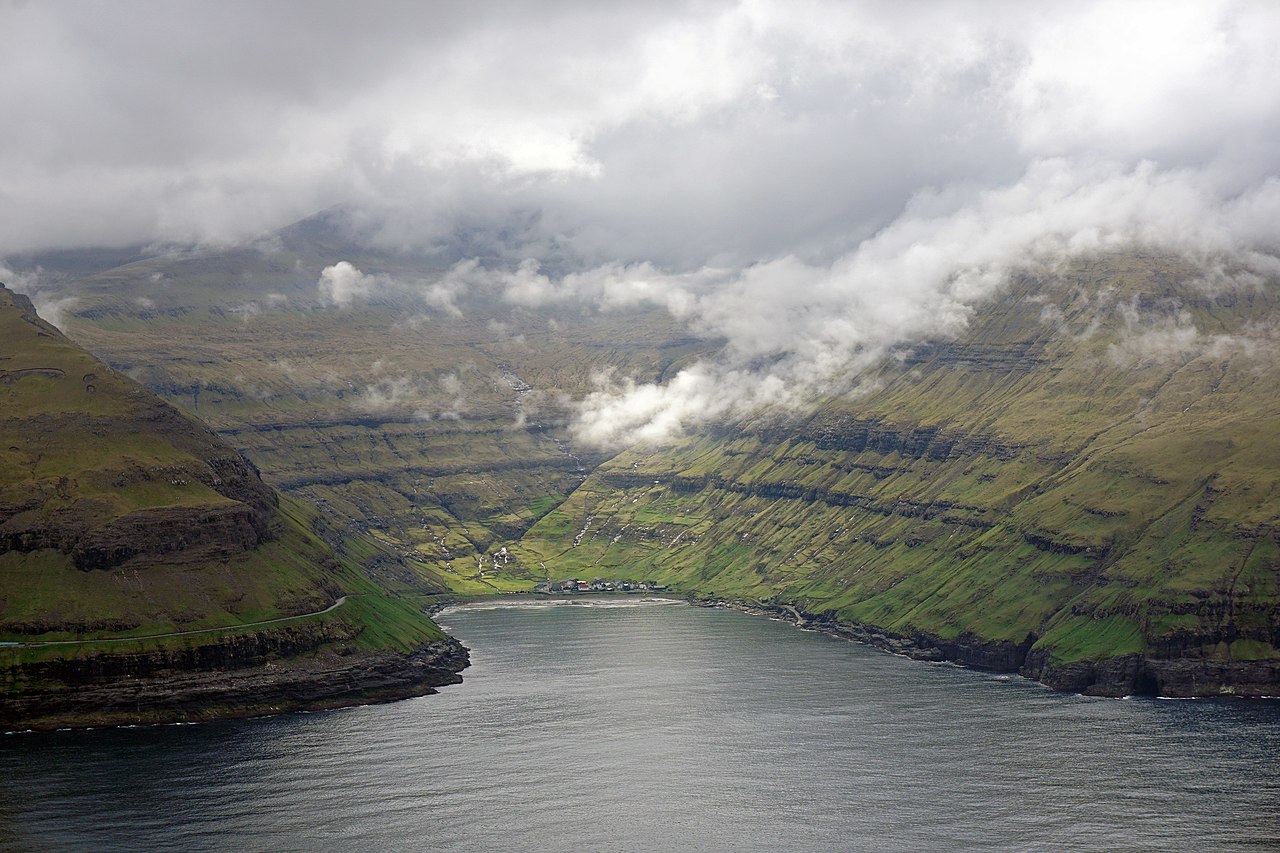 Tjørnuvík Image Wikimedia Commons
(click on the image to enlarge)

Some bones were discovered by chance in a slope at the village of Tjørnuvík , the northernmost village on Streymoy, and there on 25 May 1956 the first certain discovery of a grave of the Viking Age was made. Continued investigations have shown that twelve people were buried in a sand-dune, which with the passage of time has been completely covered by earth and stones brought down from the surrounding mountains by erosion.

The graves at Tjørnuvík are near the beach and close to an old track which has always led to the neighbouring village. The graves were about 50 cm. below the old ground surface, and they were all more or less covered with stones. Only one was not covered, and this was surrounded by a stone setting of boat-shaped form, 250 cm. long and 150 cm. across at the top.

The first grave that was excavated had sides of stone slabs and boulders, and had certainly been covered with stone slabs so as to form a cist about 150 cm. long and 50 cm. across inside; the other stone graves were of irregular form. It is not possible to decide whether the stone covers were visible in the Viking and early middle ages, but in all probability parts of the boat-shaped setting were.

There were no traces of wooden coffins or other wooden relics, with the exception of small pieces of charcoal (perhaps from a fire) scattered about the sand-hill. In one case the deceased had been interred in woollen clothes. It is well known that conditions of preservation in sand can be bad, and such proved to be the case here, but it is clear that all the graves were inhumations.

Some of the bodies were lying fully extended on their backs, others were lying on their left sides with bent knees, and all had their heads in a northerly direction, some towards the north-east, others towards the north-west. Both graves and grave-goods give an impression of poverty, although much must have been destroyed by water and land-slides.

The grave-goods from Tjørnuvík which can be identified include the remains of a knife, a buckle, and a boat rivet, and, in the first of the graves, a fairly well preserved ring-headed pin of bronze with an ornamented faceted head. This ring-headed pin is of Celtic type, and the occurrence of this type is limited to Scotland and the Viking lands in the west. It may be dated 10th century.

Although there is not much to build on, it is reasonable to suppose that this pin gives a hint of communication between the Norse settlements in the west during the first centuries of their colonization.

This text is taken from from “The Norse Settlement of the Faroe Isles”, by Sverri Dahl.