From the Anglo-Saxon Chronicles:

“anno 851. This year Alderman Ceorl, with the men of Devonshire, fought the heathen army at Wemburg, and after making great slaughter obtained the victory. The same year King Athelstan and Alderman Elchere fought in their ships, and slew a large army at Sandwich in Kent, taking nine ships and dispersing the rest. The heathens now for the first time remained over winter in the Isle of Thanet. The same year came three hundred and fifty ships into the mouth of the Thames; the crew of which went upon land, and stormed Canterbury and London; putting to flight Bertulf, king of the Mercians, with his army; and then marched southward over the Thames into Surrey. Here Ethelwulf and his son Ethelbald, at the head of the West-Saxon army, fought with them at Ockley, and made the greatest slaughter of the heathen army that we have ever heard reported to this present day. There also they obtained the victory.”

“anno 854. This year the heathen men for the first time remained over winter in the Isle of Shepey. The same year King Ethelwulf registered a TENTH of his land over all his kingdom for the honour of God and for his own everlasting salvation. The same year also he went to Rome with great pomp, and was resident there a twelvemonth. Then he returned homeward; and Charles, king of the Franks, gave him his daughter, whose name was Judith, to be his queen. After this he came to his people, and they were fain to receive him; but about two years after his residence among the Franks he died; and his body lies at Winchester.”

Next Page: Overwintering Sites of the Great Army 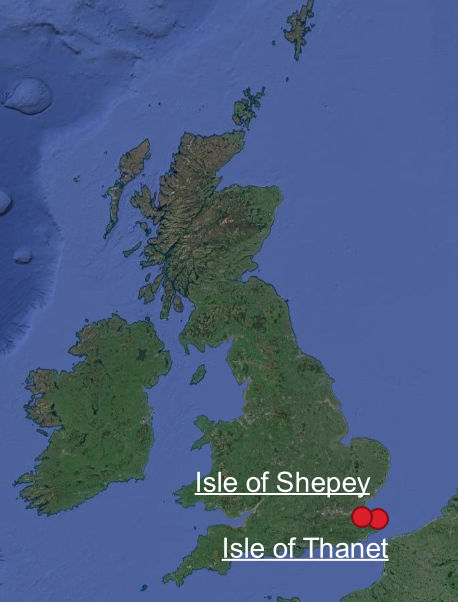