Ohthere told his lord, King Alfred, that he lived the furthest north of all Norwegians. He said that he lived in the north of Norway on the coast of the Atlantic. He also said that the land extends very far north beyond that point, but it is all uninhabited, except for a few places here and there where the Finnas have their camps, hunting in winter, and in summer fishing in the sea.

The Beormas told him many stories both about their own country and about the lands which surrounded them, but he did not know how much of it was true because he had not seen it for himself. It seemed to him that the Finnas and the Beormas spoke almost the same language. His main reason for going there, apart from exploring the land, was for the walruses, because they have very fine ivory in their tusks – they brought some of these tusks to the king – and their hide is very good for ship-ropes. This whale [i.e. walrus] is much smaller than other whales; it is no more than seven ells long. The best whale-hunting is in his own country; those are forty-eight ells long, the biggest fifty ells long; of these he said that he, one of six, killed sixty in two days.

He was a very rich man in those possessions which their riches consist of, that is in wild deer. He had still, when he came to see the king, six hundred unsold tame deer. These deer they call ‘reindeer’. Six of these were decoy-reindeer. These are very valuable among the Finnas because they use them to catch the wild reindeer. He was among the chief men in that country, but he had not more than twenty cattle, twenty sheep and twenty pigs, and the little that he ploughed he ploughed with horses. Their wealth, however, is mostly in the tribute which the Finnas pay them. That tribute consists of the skins of beasts, the feathers of birds, whale-bone, and ship-ropes made from whale-hide and sealskin. Each pays according to his rank. The highest in rank has to pay fifteen marten skins, five reindeer skins, one bear skin and ten measures of feathers, and a jacket of bearskin or otterskin and two ship-ropes. Each of these must be sixty ells long, one made from whale-hide the other from seal.

He said that the land of the Norwegians is very long and narrow. All of it that can be used for grazing or ploughing lies along the coast and even that is in some places very rocky. Wild mountains lie to the east, above and alongside the cultivated land. In these mountains live the Finnas. The cultivated land is broadest in the south, and the further north it goes the narrower it becomes. In the south it is perhaps sixty miles broad or a little broader; and in the middle, thirty or broader; and to the north, he said, where it is narrowest, it might be three miles across to the mountains. The mountains beyond are in some places of a width that takes two weeks to cross, in others of a width that can be crossed in six days.

Ohthere said that the district where he lived is called Halgoland. He said no-one lived to the north of him. In the south part of Norway there is a trading-town which is called Sciringes heal. He said that a man could scarcely sail there in a month, assuming he made camp at night, and each day had a favourable wind. He would sail by the coast the whole way. To starboard is first of all Iraland and then those islands which are between Iraland and this land, and then this land until he comes to Sciringes heal, and Norway is on the port side the whole way. To the south of Sciringes heal a great sea penetrates the land; it is too wide to see across. Jutland is on the far side and after that Sillende. This sea flows into the land for many hundred miles.

From Sciringes heal he said that he sailed in five days to the trading-town called Hedeby, which is situated among Wends, Saxons and Angles and belongs to the Danes. When he sailed there from Sciringes heal he had Denmark to port and the open sea to starboard for three days. Then two days before he arrived at Hedeby he had Jutland and Sillende and many islands to starboard. The Angles lived in these districts before they came to this land. On the port side he had, for two days, those islands which belong to Denmark.

View this text in Old English 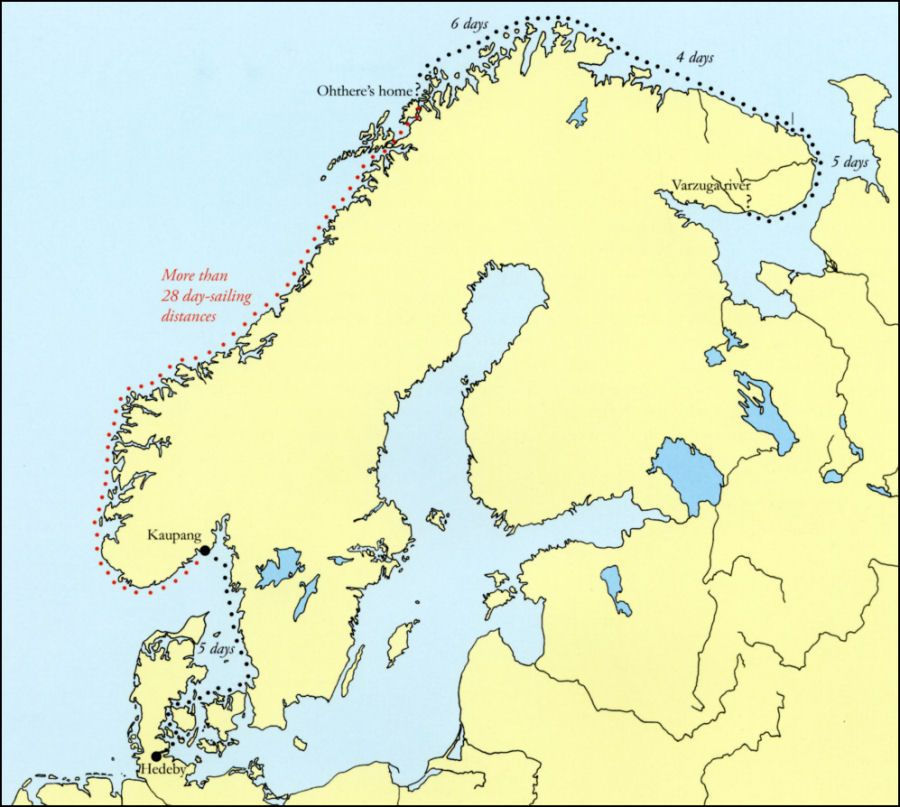 Two Voyages and a standard sailing route. The routes reported by Ohthere circumscribe the entire north and west coast of Fenoscandinavia. Ohthere’s home and the turning point of his northern voyage cannot be identified with certainty.