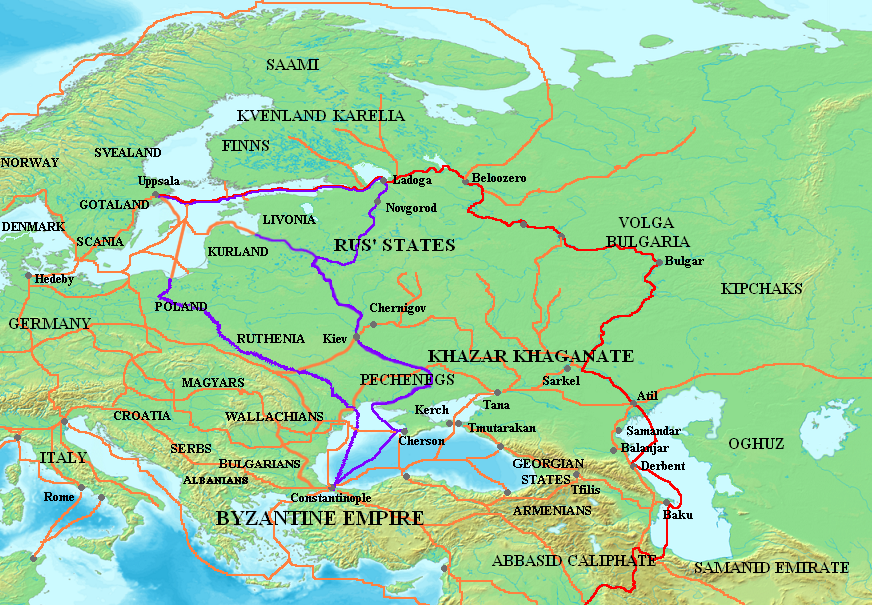 Map showing the major Varangian trade routes: the Volga trade route (in red) and the trade route from the Varangians to the Greeks (in purple). Other trade routes of the 8th to the 11th centuries shown in orange.
Image Wikimedia Commons
(click on the images to enlarge)

The Vikings in Russia The Terms Rus and Varangian Rus Trade Routes to the East The Journey of Ibn Fadlan to the Volga The Risala of Ibn Fadlan
The route from the Varangians to the Greeks was a trade route, which connected Scandinavia, Kievan Rus, and the Byzantine Empire.

This route (or routes) allowed various traders along the way to establish trade with Byzantium, and prompted settlement in the territories of present-day Belarus, Russia and Ukraine.

The route began in Scandinavian trading centres such as Birka, Hedeby, and Gotland, crossed the Baltic Sea entered the Gulf of Finland, followed the Neva River into the Lake Ladoga. Then it followed the Volkhov River, upstream past the towns of Staraya Ladoga and Veliky Novgorod, crossed Lake Ilmen, and up the Lovat River. From there, ships had to be portaged to the Dnieper River near Gnezdovo.

There was a second route from the Baltic to the River Dnieper was along the Western Dvina (Daugava) between the Lovat and the Dnieper in the Smolensk region, and along the Kasplya River to Gnezdovo. Along the Dnieper, the route crossed several major rapids and passed through Kiev, and after entering the Black Sea followed its west coast to Constantinople.

Next Page: Journey of Ibn Fadlan to the Volga