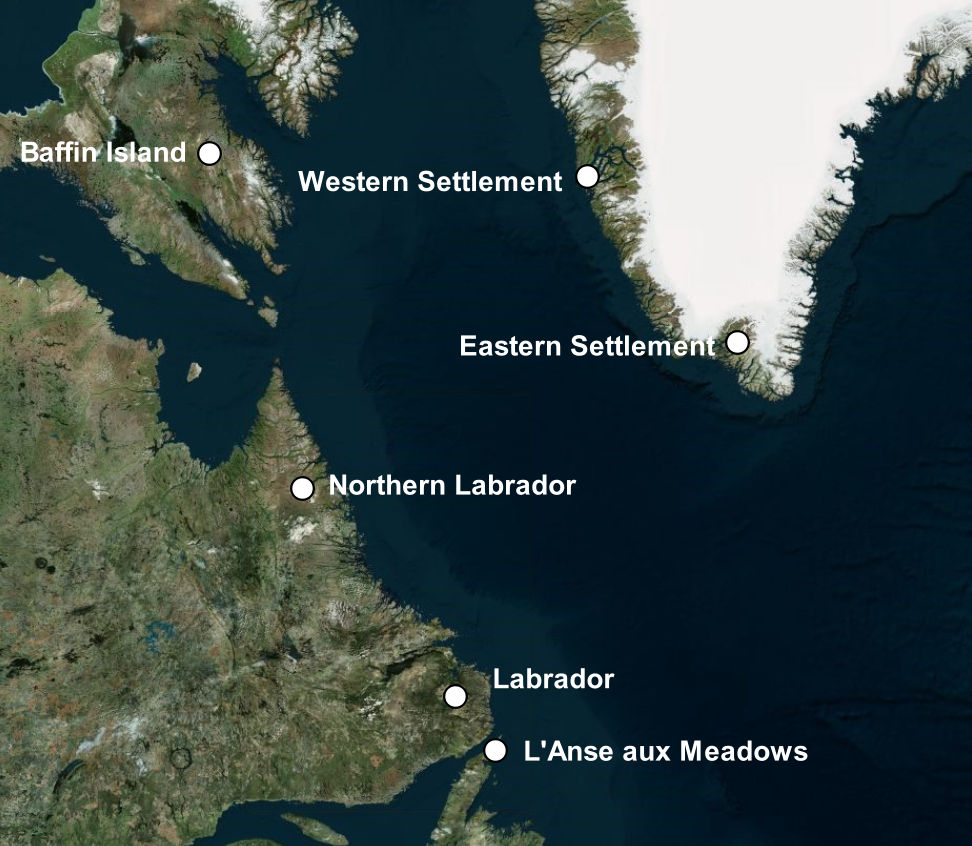 Map A shows the Greenland settlements and the possible location of the sites discovered by Bjarni Herjólfsson.

All Maps by David Beard
(click on the maps to enlarge)

The Discoveries of Bjarni Herjólfsson

Chapter 2 of the Greenland Saga tells how Bjarni Herjólfsson was met with northerly winds and fog while sailing to Greenland. For many days they had no idea where they were. Then they saw the sun again and were able to take their bearings. They hoisted the sail and after a day’s sail they sighted land.

Bjarni thought that the land could not be Greenland. They sailed in close and saw that the land was not mountainous, but well wooded and with low hills. The crew wanted to land to take on firewood and water, but Bjarni refused so they sailed on.

After two day’s sailing they sighted land again. This time the land was flat and well wooded. Again, Bjarni thought that this was not Greenland “for there are said to be huge glaciers in Greenland.”

They sailed for three days with a south-west wind and sighted land for the third time. This land was high and mountainous and topped by a glacier. The crew asked Bjarni if he wanted to land, but he said that the country seemed to be worthless. As they sail along the coastline, they see that this is an island.

They sailed out to sea again and the wind began to blow a gale and Bjarni ordered the shorten the sail. After four day’s sailing they finally reached Greenland. 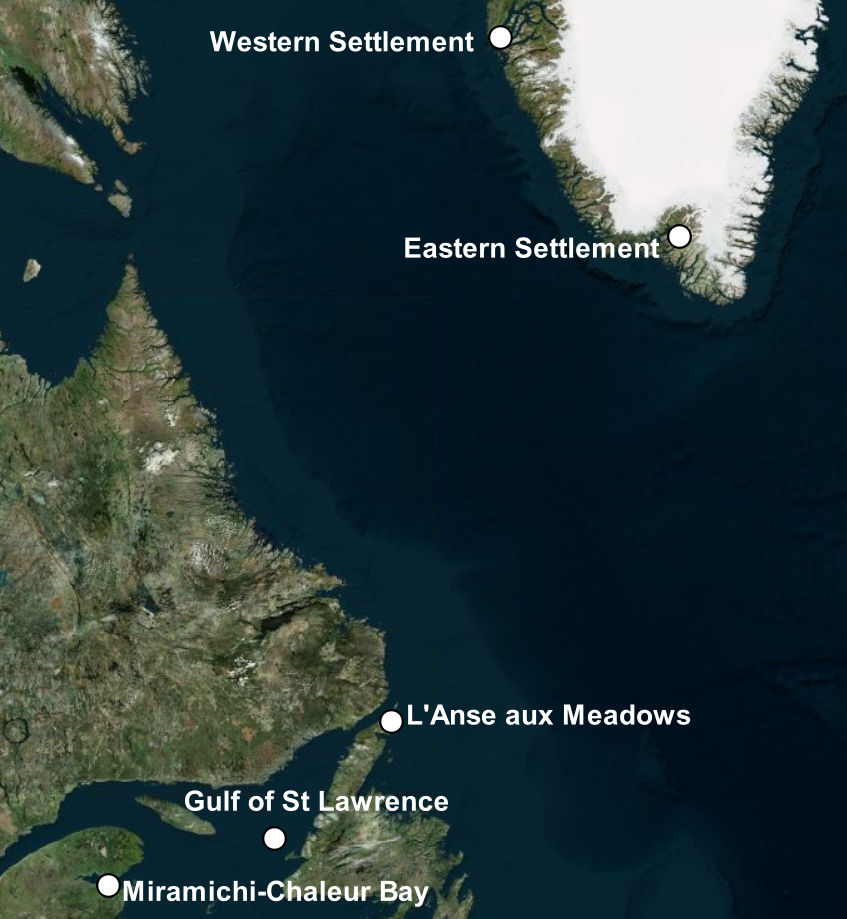 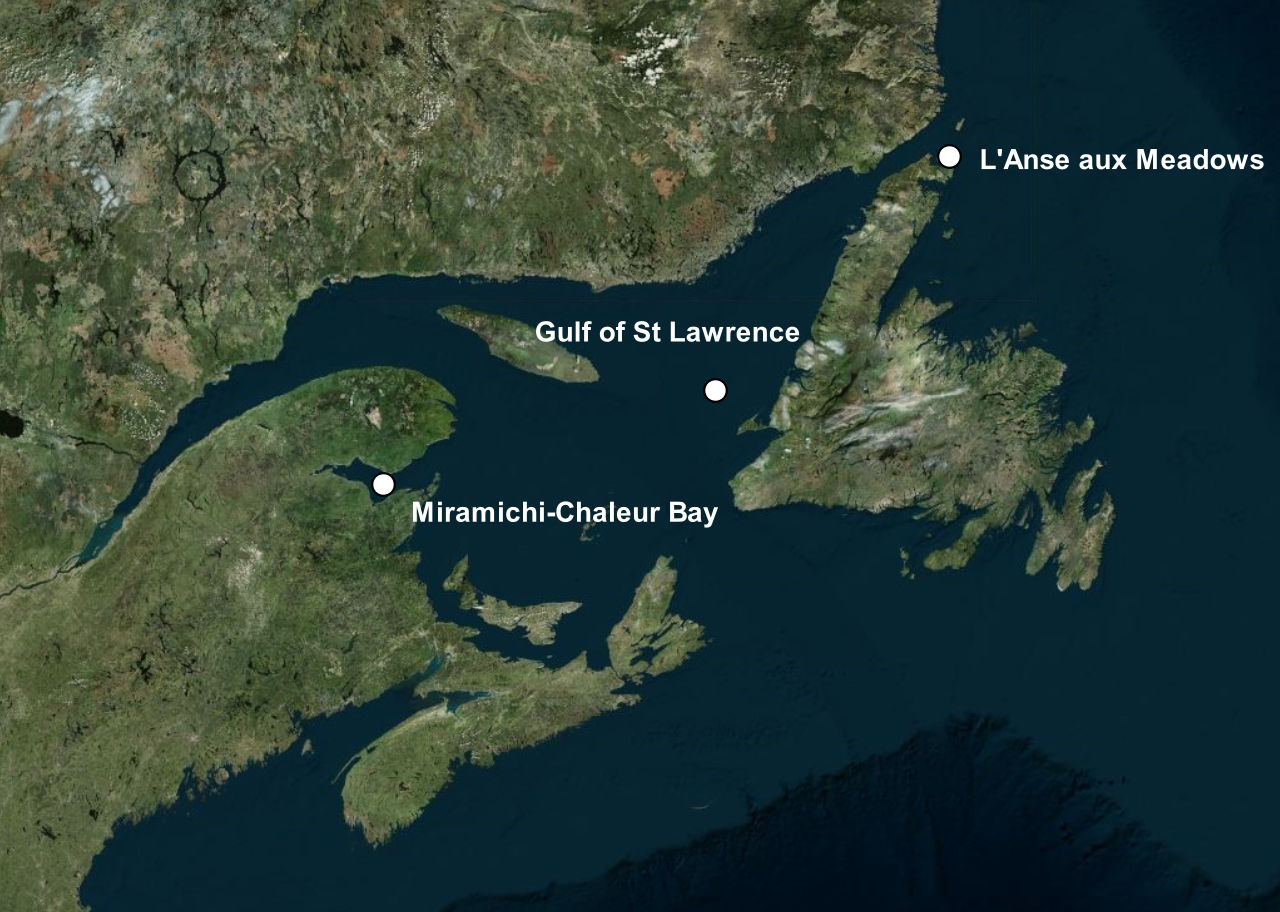 Naturally, there was great interest in Bjarni’s discoveries, and he was criticised for being óforvitinn (uncurious). Leifr Eríksson – the son of Erík the Red – bought Bjarni’s ship and sailed with a crew of 35 men to retrace Bjarni’s journey.

It is likely from the descriptions of the voyage and the landscapes that Helluland was part of Baffin Island or northern Labrador and that Markland was probably in Labrador (see Map A).

They then set sail again with a north-east wind for two days until they saw land again. They sailed towards this land and came to an island that lay to the north of it.

”They went ashore and looked about them. The weather was fine. There was dew on the grass, and the first thing that they did was to get some of it on their lips and to them it seemed the sweetest thing they had ever tasted. Then they went back to their ship and sailed into the sound that lay between the island and the headland jutting out to the north.

They steered a westerly course round the headland. There were extensive shallows there and at low tide their ship was left high and dry, with the sea almost out of sight. But they were so impatient to land that they could not bear to wait for the rising tide to float the ship; they ran ashore to a place where a river flowed out of a lake. As soon as the tide refloated the ship they took a boat and rowed out to it and brought it up the river into the lake where they anchored it. Then they carried their hammocks ashore and put up booths. Then they decided to winter there and built some large houses.” 1

The passage continues with a description of the land: “There was no lack of salmon in the river or the lake, bigger salmon than they had ever seen. The country seemed so kind that no winter fodder would be needed for livestock: there was never any frost all winter and the grass hardly withered at all.

In this country, night and day were of more even length than in either Greenland or Iceland: on the shortest day of the year, the sun was already up by dagmálsstaðr and did not set until after eykðarstaðr “ 2

On the east coast, salmon are not usually found further south than the Hudson River (latitude c. 40° 40’ N) and the description of the length of the shortest day means that the area must have been south of latitude fifty and north of latitude 40, which would be somewhere between the Gulf of St Lawrence and New Jersey.

Leifr decided to divide the crew into two halves which would take it in turn for one half to go exploring the area and for the other half to remain to remain at the base. This carried on for some time until one evening when the news came that Tyrkir the German was missing. Leifr was angry and set up a search party. They had not gone far when Tyrkir appeared.

“‘I did not go much farther than you,’ he said. ‘I have some news. I found vines and grapes. ‘Is that true, foster-father?’ asked Leif. ‘Of course, it is true,’ he replied. ‘Where I was born there were plenty of vines and grapes.’ They slept for the rest of the night, and next morning Leif said to his men, ‘Now we have two tasks on our hands. On alternate days we must gather grapes and cut vines, and then fell trees, to make a cargo for my ship.’ This was done. The tow-boat was filled with grapes. They took on a full cargo of timber; and in the spring they made ready to leave and sailed away. Leif named the country after its natural qualities and called it Vinland.” 3

All the available evidence points to Vinland being in the Gulf of St. Lawrence area. L’Anse aux Meadows is too far north to have produced the wild grapes mention in the Vinland Sagas, even during a climatic optimum, therefore it is not a part of Vinland. So, what was the settlement at L’Anse aux Meadows?

It certainly looks as if L’Anse aux Meadows would have been an important point en route, but where was the land with all the resources described in the Sagas? A strong possibility is that Vinland consists of the coast lands skirting the Gulf of St. Lawrence and that Hóp was in the Miramichi-Chaleur Bay region of New Brunswick (see Map C).

The second video shows Dr. Jackson Crawford, a philologist from the University of Colorado, who discusses the evidence from the Vinland Sagas.