Wulfstan said that he travelled from Hedeby, arriving in Truso after seven days and nights, the boat running under sail the whole way. To starboard he had Wendland, to port Langeland, Lolland, Falster and Skane. All these lands belong to Denmark.

‘Then we had Bornholm to port, where the people have their own king. Then after Bornholm we had on our port side the lands which are called Blekinge, More, 01and and Gotland, and these lands belong to the Swedes. Wendland was to starboard the whole of the way to the mouth of the Vistula.’ This Vistula is a very large river which separates Witland and Wendland. Witland belongs to the Este. The Vistula flows out of Wendland into Estmere which is at least fifteen miles wide. The Elbing flows into Estmere from the lake on the shore of which Truso stands, and they flow together into Estmere, the Elbing west from Estland and the Vistula north from Wendland. Then the Vistula deprives the Elbing of its name for the estuary is known as the Vistula estuary and flows from Estmere northwest into the sea.

This Estland is very large and has many fortified settlements, and in each of these there is a king. There is a great deal of honey and fishing. The king and the most powerful men drink mare’s milk, the poor men and the slaves drink mead. There is very much strife among them. There is no ale brewed among the Este but there is plenty of mead. There is a custom among the Este that after a man’s death he lies indoors uncremated among his relatives and friends for a month, sometimes two. The kings and other high-ranking men remain uncremated sometimes for half a year – the more wealth they have the longer they lie above ground in their houses. All the time that the corpse lies indoors it is the custom for there to be drinking and gambling until the day on which they cremate it. On the very day on which they intend to carry the dead man to the pyre, they divide his property -whatever is left of it after the drinking and gambling – into five or six portions, sometimes more, depending on how much there is. They place the biggest portion about a mile from the settlement, then the second, then the third, until it is all distributed within the mile, so that the smallest portion is closest to the place where the dead man lies. All the men who have the swiftest horses in the country are assembled at a point about five or six miles from the property, and then they all gallop towards it. The man who has the fastest horse comes to the first portion (which is also the largest) and then one after another until it has all been taken. He has the smallest portion who gets from his ride the one nearest to the settlement. Then each of them rides on his way with the property and is allowed to keep it all. For this reason good horses are extremely valuable there. When the man’s treasures have all been spent in this way, then he is carried out and burned up with his weapons and clothes. They use up most of the dead man’s wealth with what they squander during the long period of his lying in the house, and with what they put by the wayside which strangers ride up to and take. It is the custom among the Este that the men of each tribe are cremated, and if one bone is found not completely burned, heavy compensation must be paid.

There is a tribe among the Este that knows how to cause cold, and this is why the dead men there lie so long and do not rot, because they keep them cold. If two containers are put out full of beer or water, they can cause one of the two to be frozen over whether it is summer or winter.

View this text in Old English 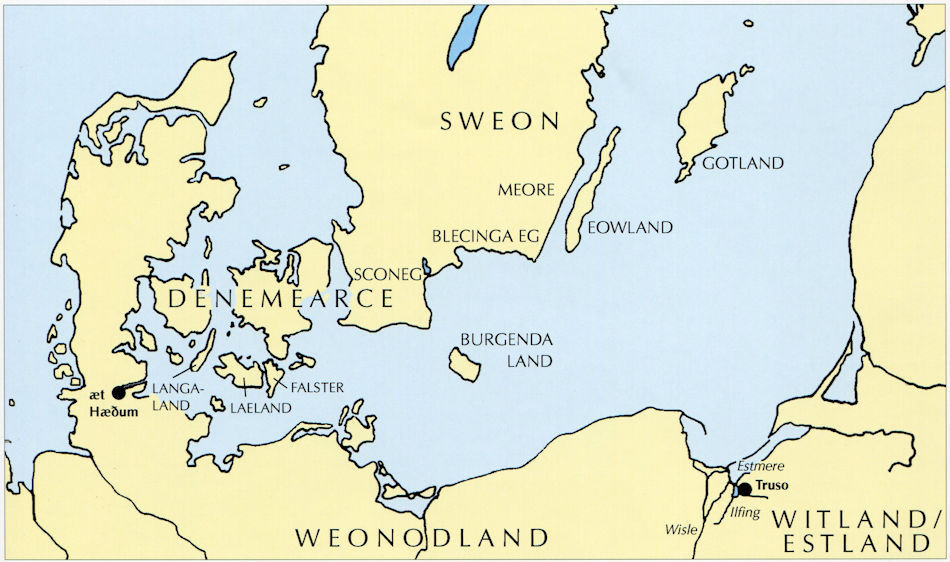