From Skáldskaparmál: The story of how Odin stole the mead of Poetry

Then said Ægir: “I deem that well concealed in secret terms,” And again said Ægir:” Whence did this art, which ye call poesy, derive its beginnings?” Bragi answered: “These were the beginnings thereof: The gods had a dispute with the folk which are called Vanir, and they appointed a peace-meeting between them and established peace in this way: they each went to a vat and spat their spittle therein. Then at parting the gods took that peace-token and would not let it perish, but shaped thereof a man. This man is called Kvasir, and he was so wise that none could question him concerning anything but that he knew the solution. He went up and down the earth to give instruction to men; and when he came upon invitation to the abode of certain dwarves, Fjalar and Galarr, they called him into privy converse with them, and killed him, letting his blood run into two vats and a kettle. The kettle is named Ódrerir, and the vats Son and Bodn; they blended honey with the blood, and the outcome was that mead by the virtue of which he who drinks becomes a skald or scholar. The dwarves reported to the Æsir that Kvasir had choked on his own shrewdness, since there was none so wise there as to be able to question his wisdom.

“Then these dwarves invited the giant who is called Gillingr to visit them, and his wife with him. Next the dwarves invited Gillingr to row upon the sea with them; but when they had gone out from the land, the dwarves rowed into the breakers and capsized the boat. Gillingr was unable to swim, and he perished; but the dwarves righted their boat and rowed to land. They reported this accident to his wife, but she took it grievously and wept aloud. Then Fjalar asked her whether it would ease her heart if she should look out upon the sea at the spot where he had perished; and she desired it. Then he spoke softly to Galarr his brother, bidding him go up over the doorway, when she should go out, and let a mill-stone fall on her head, saying that her weeping grew wearisome to him; and even so he did.

“Now when the giant Suttungr, Gillingr’s son, learned of this, he went over and took the dwarves and carried them out to sea, and set them on a reef which was covered at high tide. They besought Suttungr to grant them respite of their lives, and as the price of reconciliation offered him the precious mead in satisfaction of his father’s death. And that became a means of reconciliation between them. Suttungr carried the mead home and concealed it in the place called Hnitbjörg, placing his daughter Gunnlöd there to watch over it. Because of this we call poesy Kvasir’s Blood or Dwarves’ Drink, or Fill, or any kind of liquid of Ódrerir, or of Bodn, or of Son, or Ferry-Boat of Dwarves- since this mead brought them life-ransom from the reef-or Suttungr’s Mead, or Liquor of Hnitbjörg.”

Then Ægir said: “These seem to me dark sayings, to call poesy by these names. But how did ye Æsir come at Suttungr’s Mead?” Bragi answered: “That tale runs thus: Odin departed from home and came to a certain place where nine thralls were mowing hay. He asked if they desired him to whet their scythes, and they assented. Then he took a hone from his belt and whetted the scythes; it seemed to them that the scythes cut better by far, and they asked that the hone be sold them. But he put such a value on it that whoso desired to buy must give a considerable price: nonetheless all said that they would agree, and prayed him to sell it to them. He cast the hone up into the air; but since all wished to lay their hands on it, they became so intermingled with one another that each struck with his scythe against the other’s neck.

“Odin sought a night’s lodging with the giant who is called Baugi, Suttungr’s brother. Baugi bewailed his husbandry, saying that his nine thralls had killed one another, and declared that he had no hope of workmen. Odin called himself Bölverkr in Baugi’s presence; he offered to undertake nine men’s work for Baugi, and demanded for his wages one drink of Suttungr’s Mead. Baugi declared that he had no control whatever over the mead, and said that Suttungr was determined to have it to himself, but promised to go with Bölverkr and try if they might get the mead. During the summer Bölverkr accomplished nine men’s work for Baugi, but when winter came he asked Baugi for his hire. Then they both set out for Suttungr’s. Baugi told Suttungr his brother of his bargain with Bölverkr; but Suttungr flatly refused them a single drop of the mead. Then Bölverkr made suggestion to Baugi that they try certain wiles, if perchance they might find means to get at the mead; and Baugi agreed readily. Thereupon Bölverkr drew out the auger called Rati, saying that Baugi must bore the rock, if the auger cut. He did so. At last Baugi said that the rock was bored through, but Bölverkr blew into the auger-hole, and the chips flew up at him. Then he discovered that Baugi would have deceived him, and he bade him bore through the rock. Baugi bored anew; and when Bölverkr blew a second time, then the chips were blown in by the blast. Then Bölverkr turned himself into a serpent and crawled into the auger-hole, but Baugi thrust at him from behind with the auger and missed him. Bölverkr proceeded to the place where Gunnlöd was, and lay with her three nights; and then she gave him leave to drink three draughts of the mead. In the first draught he drank every drop out of Odrerir; and in the second, he emptied Bodn; and in’ the third, Son; and then he had all the mead. Then he turned himself into the shape of an eagle and flew as furiously as he could; but when Suttungr saw the eagle’s flight, he too assumed the fashion of an eagle and flew after him. When the Æsir saw Odin flying, straightway they set out their vats in the court; and when Odin came into Ásgard, he spat up the mead into the vats. Nevertheless he came so near to being caught by Suttungr that he sent some mead backwards, and no heed was taken of this: whosoever would might have that, and we call that the poetaster’s part. But Odin gave the mead of Suttungr to the Æsir and to those men who possess the ability to compose. Therefore we call poesy Odin’s Booty and Find, and his Drink and Gift, and the Drink of the Æsir.”

From Skáldskaparmál (part of the Prose Edda) 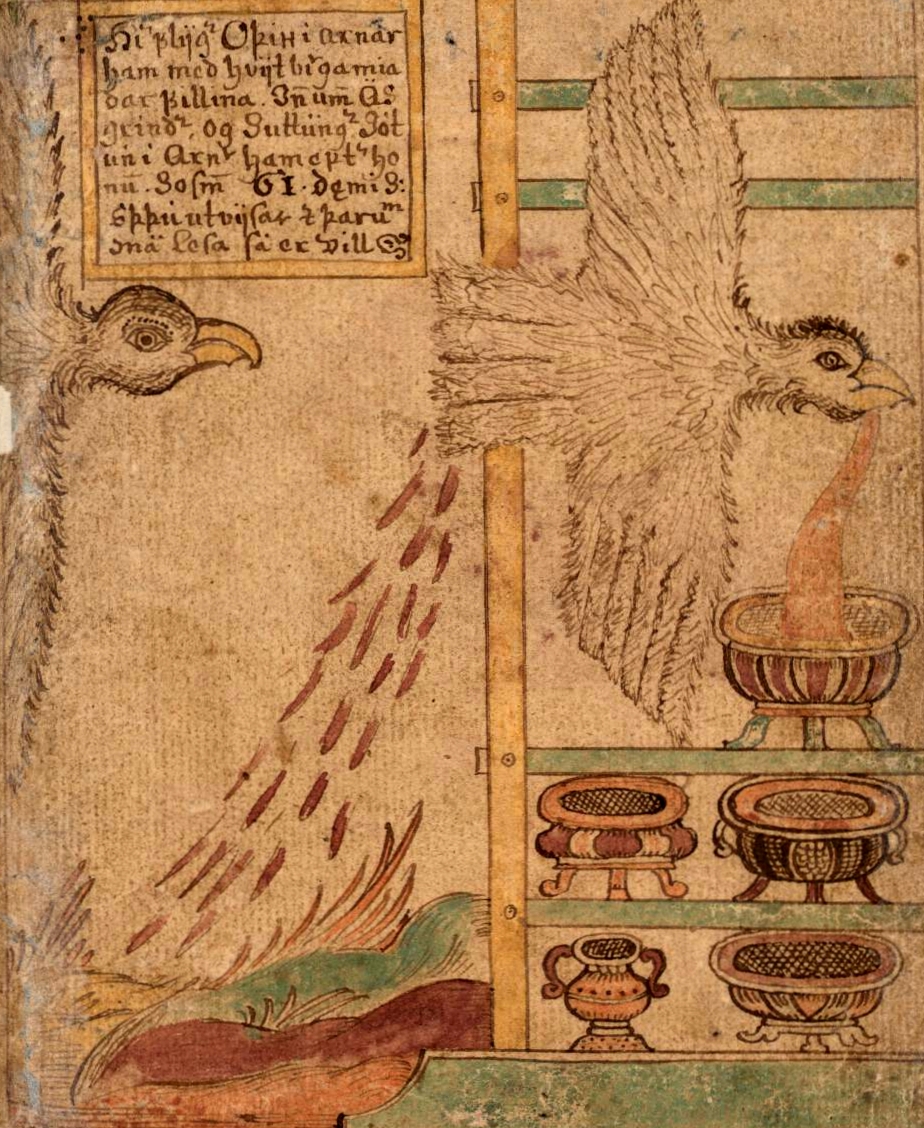