Bláklædda Konan – The Lady in Blue

Woman from the burial of Ketilstaðir, Iceland. Illustration Greg Rebis, 2015.
Image National Museum of Icland
(click on the image to enlarge)

This webpage is dedicated to the two women working in the shop in the National Museum of Iceland who told me that they had sold out of copies of the book ‘Bláklædda Konan’ and had no idea if it would be reprinted. On seeing my disappointment, they decided that the museum only needed one, not two reference copies, and sold me the second copy. Kærar þakkir!

In 2014 a jar was discovered in the collections of the National Museum of Iceland which contained formaldyhyde and the jaw and soft tissue of a woman. On consulting the museum record, This was found to be from a 1938 excavation of a Viking Age grave. This discovery led to a full-scale project with an international team of experts to review the evidence from this burial . 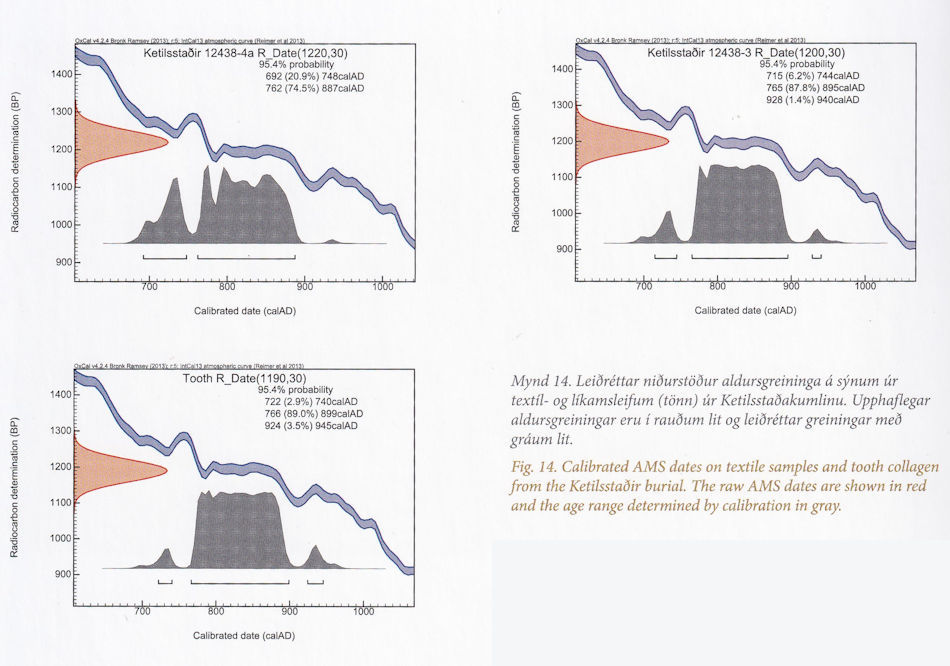 All three AMS dates together, with the red line marking the 871±2 Landnám tephra
(click on the image to enlarge)

In 1938 a Viking Age grave was discovered at Ketilsstađir in Hjaltastađaþinghá, East Iceland during road works. The grave had not been looted and remained intact, although the exterior and surroundings had been damaged by the road construction, so it was not clear if the grave had been covered by a mound, although traces of a circular enclosure were seen1.

The grave was that of a young woman who had been buried fully dressed in garments typical of the Viking Period and her jewellery was of high quality.2

Most of the organic material in the grave had disappeared, but the corrosion products on the oval brooches had preserved fragments of linen and woollen material.3

Among the finds from the 1938 excavation was a complete lower jaw together with part of the woman’s cheek. The position of the body in the grave had resulted in the left cheek being pressed against one of her copper-alloy brooches. The presence of the corroding copper acted as a biocide which prevented micro-organisms from destroying the soft tissue. The cheek and the teeth had been stained green by the copper salts but were otherwise in a good state of preservation.4

The Skeleton of the woman and her grave goods provide a great deal of important evidence for this burial, but the presence of soft tissue from this period is unique in Iceland. A team of experts from various fields were assembled to examine every possible aspect of this burial, and the results led to an amazing exhibition in the National Museum in Reyjavik.

The results from this project are not only of importance for this burial, they also show what modern techniques can derive from earlier excavations.

What do we know now about the woman buried near Ketilsstađir 1100 years ago?5

With advances in scientific research methods we are now able to gain more information about the woman than was possible in 1938 when her grave was found. The woman’s profile that we gained from the research suggests that:

She was born around the end of the ninth century, most likely in the Scottish Isles, or in the western or southern part of England, Ireland or Wales.

Around the age 5 – 10 she had a change of residence and moved probably directly to Iceland.

Generally, she was in good health, although she may have experienced a period of nutritional stress in childhood.

She was buried with jewelry and other tools for everyday work. Wooden remains indicate that her grave goods may have been contained in a small box.

Her jewellery was made in the 10th century.

She was wearing a long linen shirt or gown beneath a blue apron or pinafore with straps. The apron was decorated with a tablet woven band. Her clothes were fastened in place by oval brooches. Her woollen clothes were made in Iceland and the wool was collected from sheep that grazed here. (i.e. in Iceland)

See also: The Lady in Blue-Bláklædda Konan: the textiles. National Museum of Iceland. 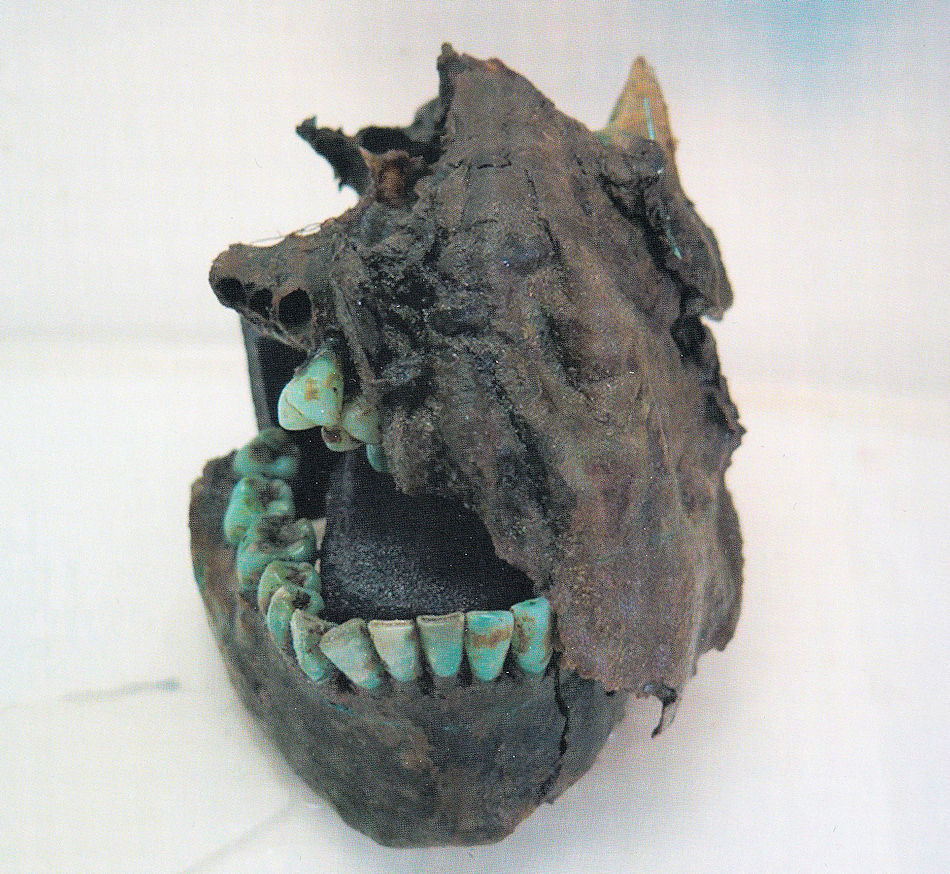 The Woman’s Jaw and Flesh 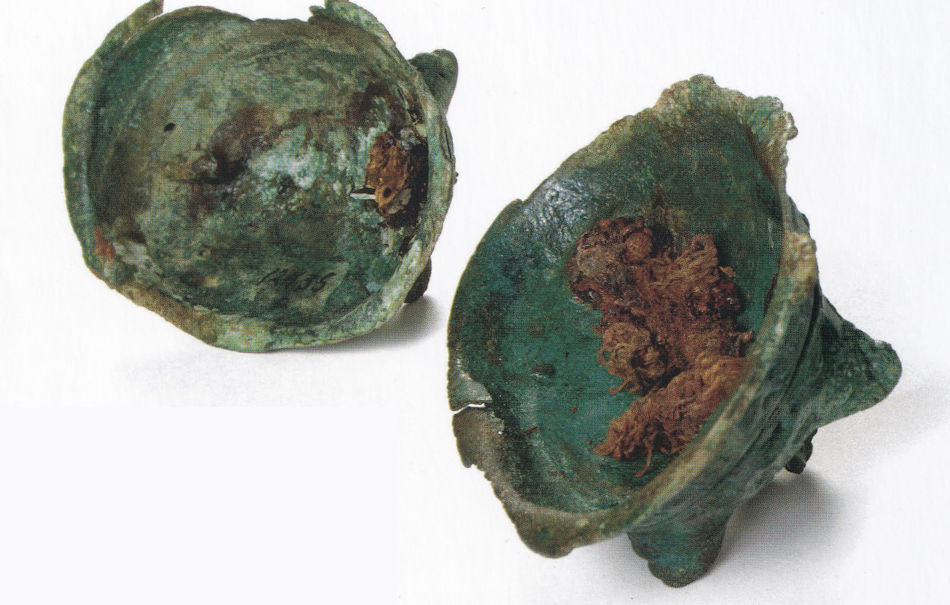 Mineralised woolen and linen fibres on the brooches 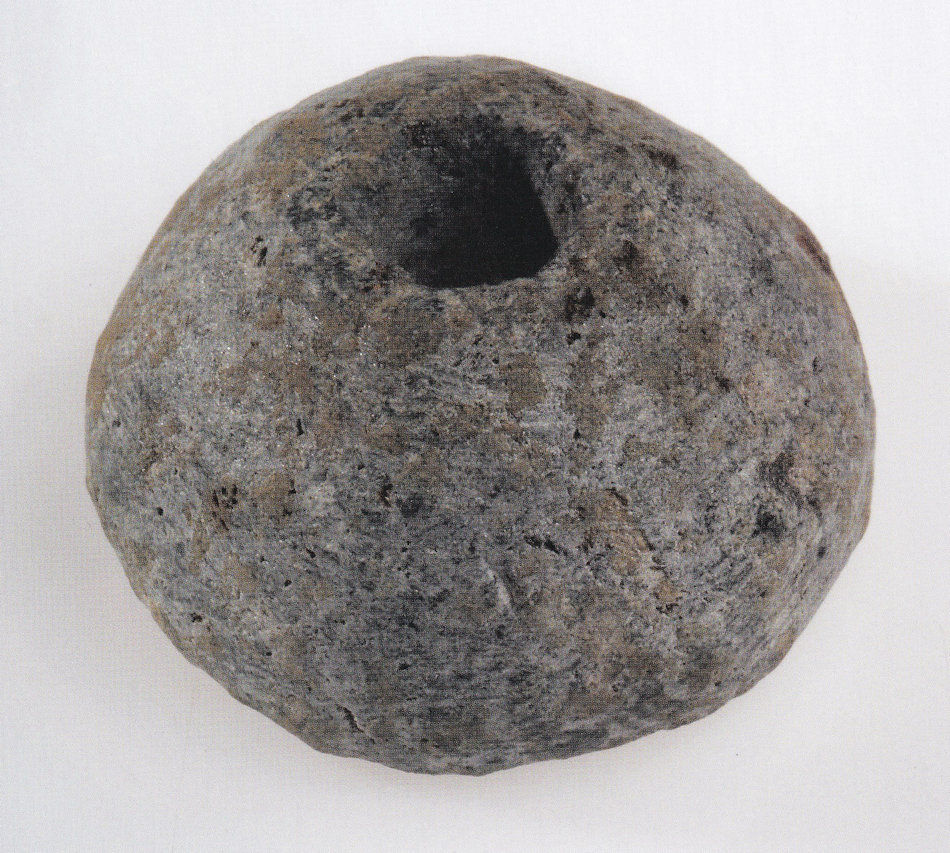 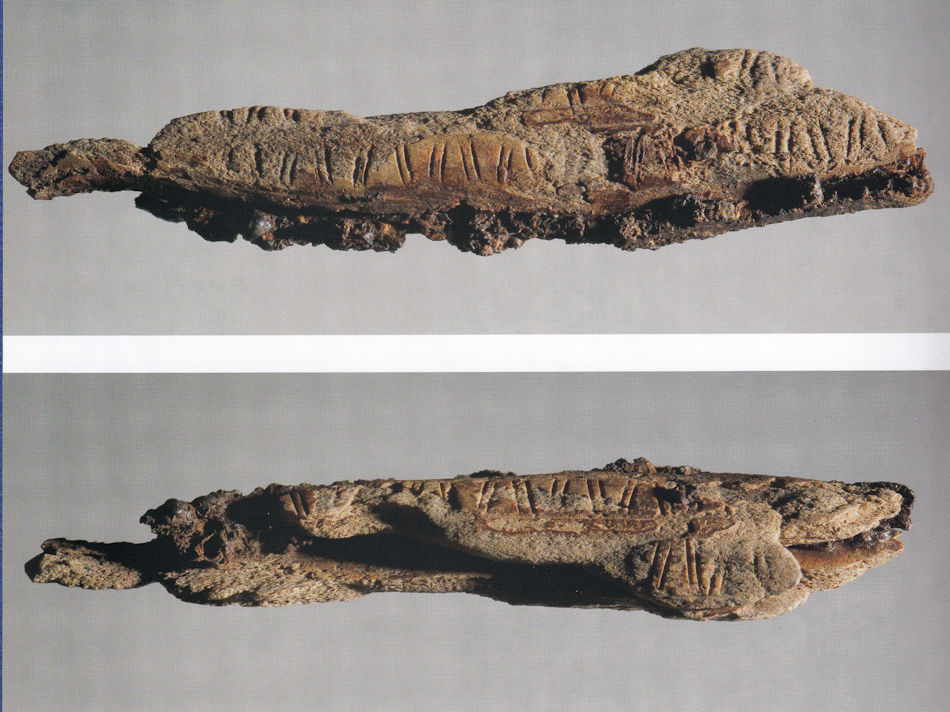 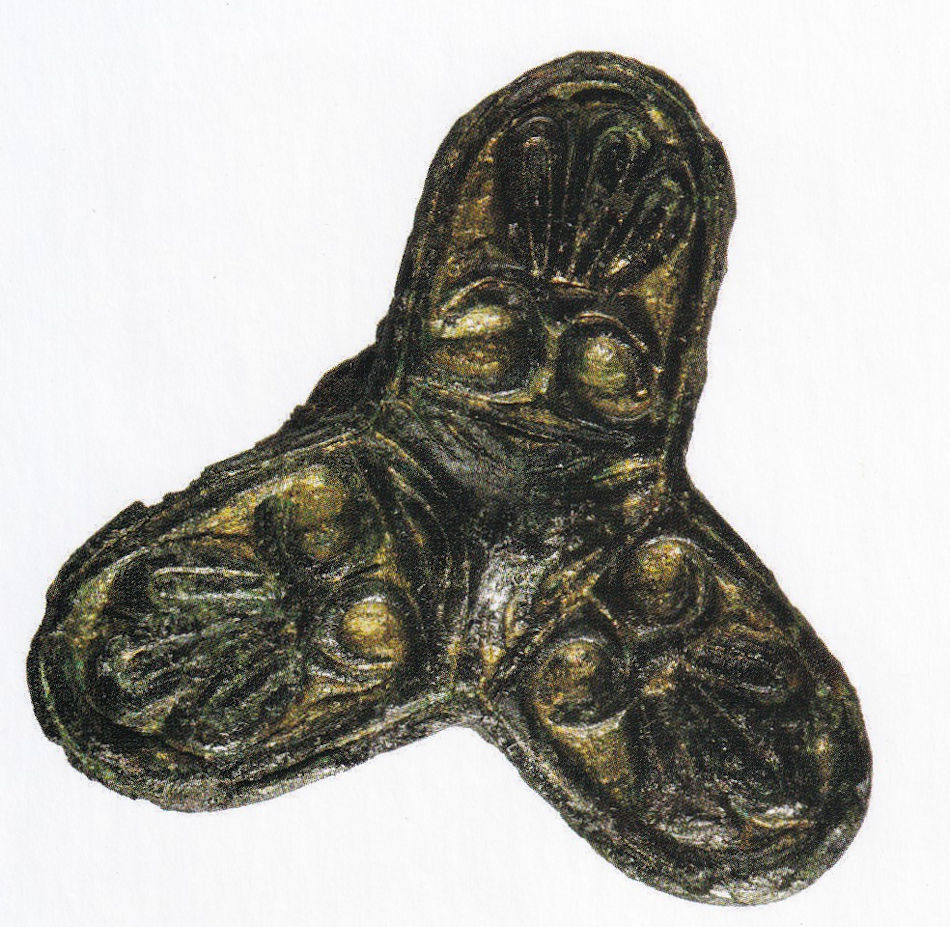 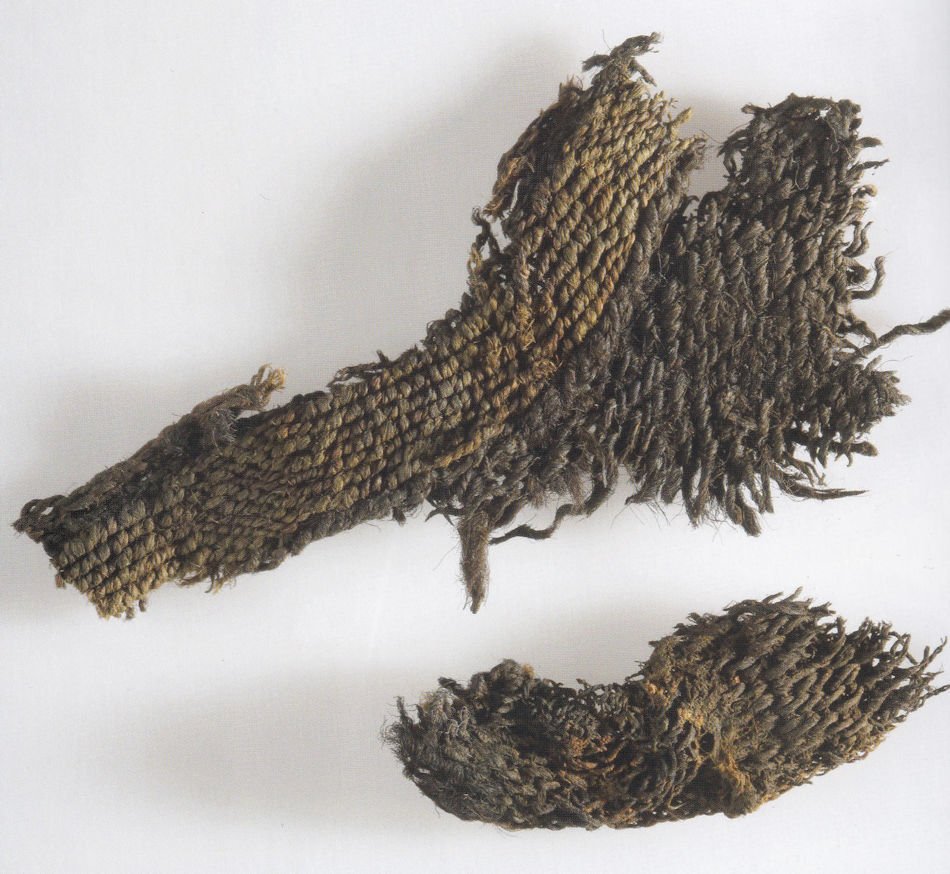 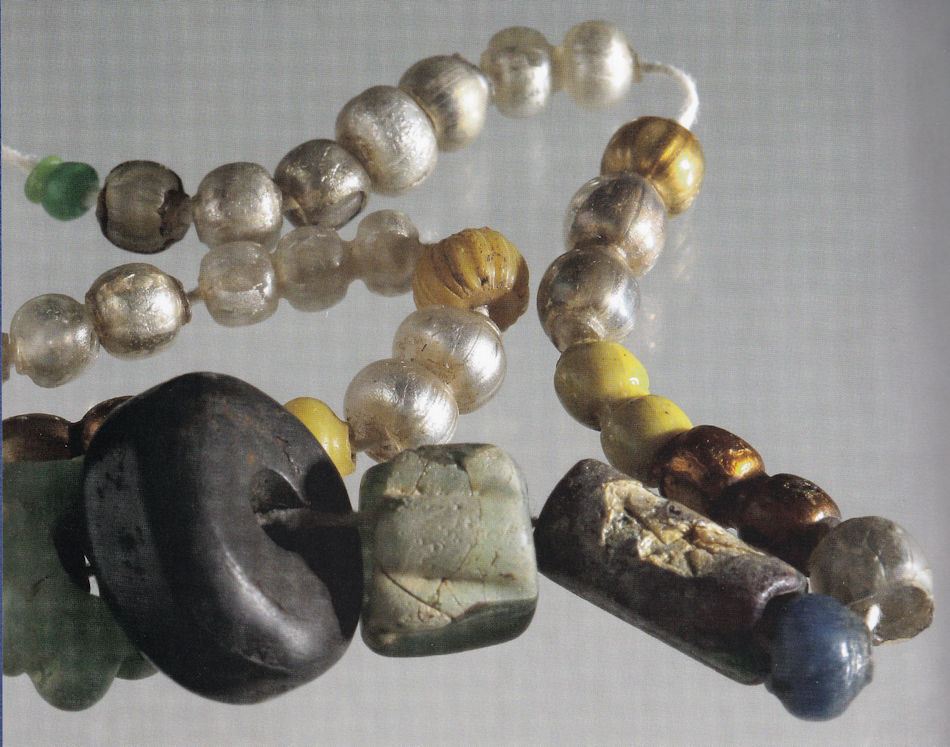 Beads from the Grave 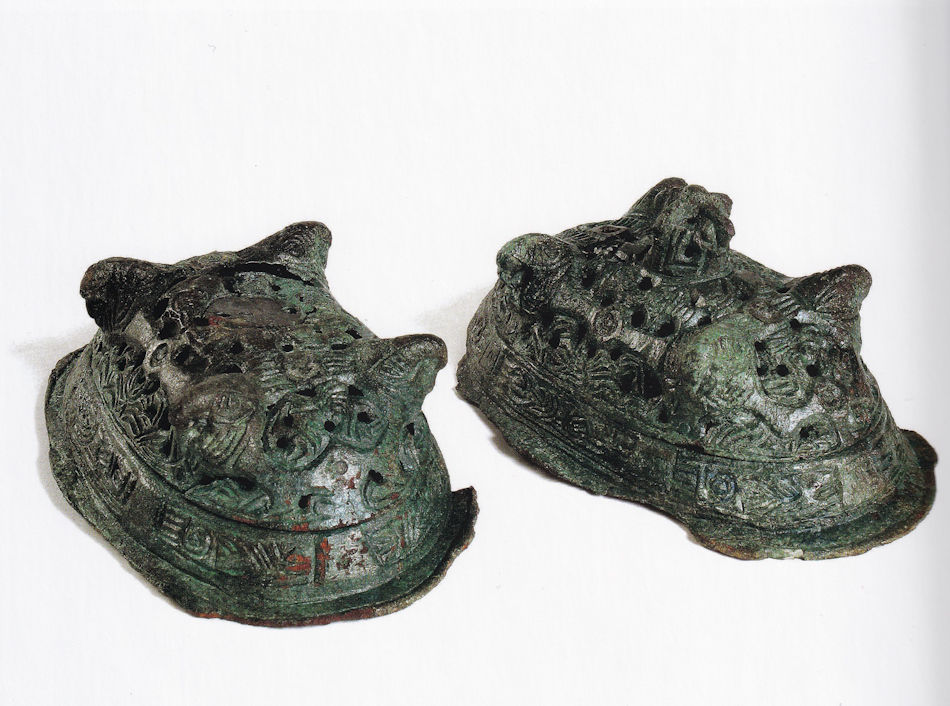 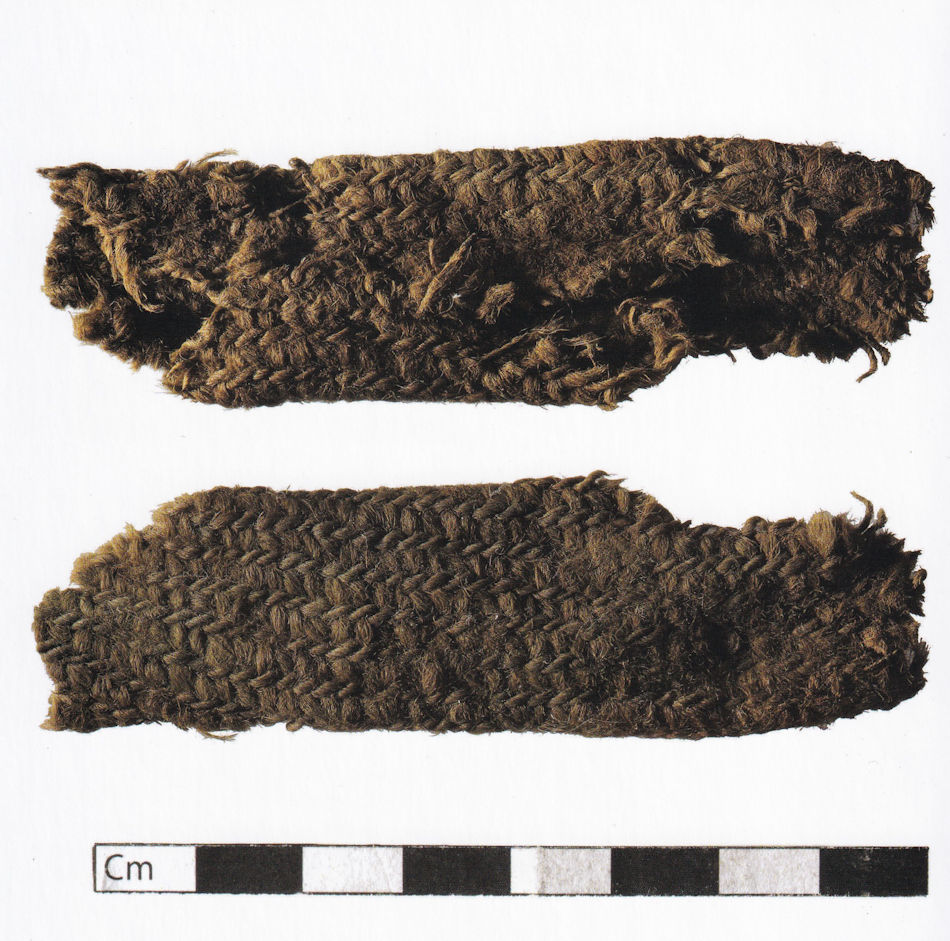 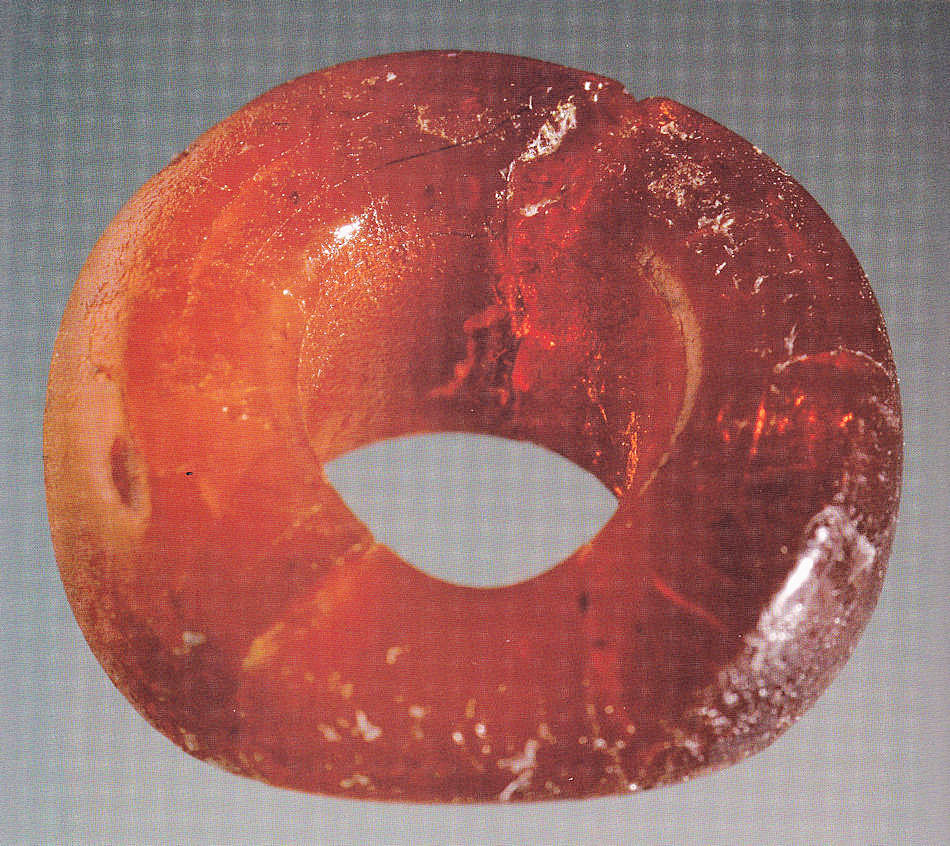 Amber Bead from the Grave 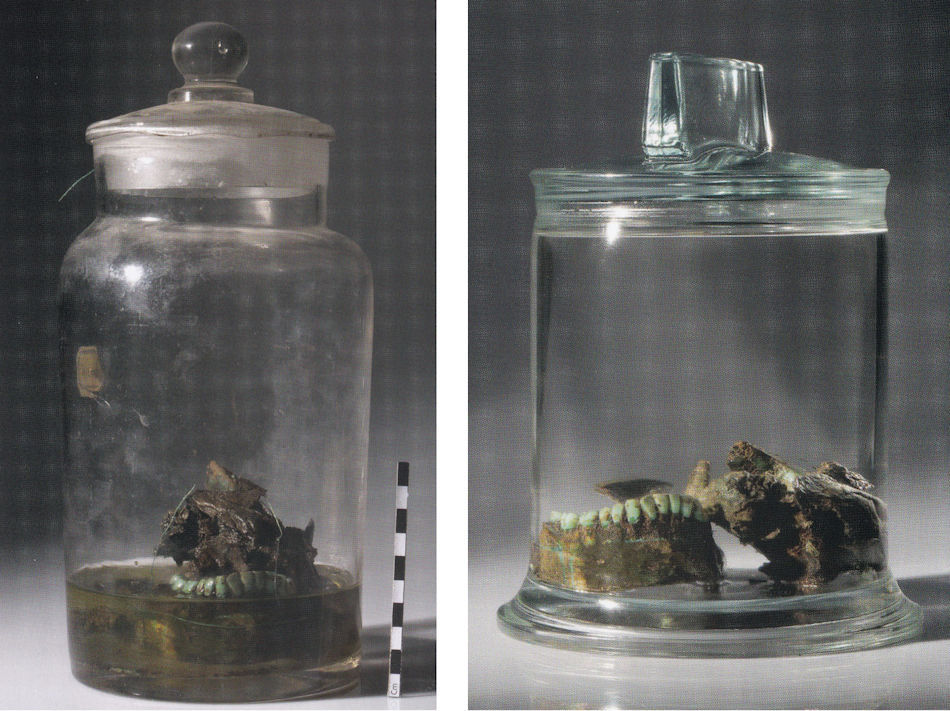 The woman’s remains before and after
conservation