Navigation in the Viking Age

Little is known for certain about the navigation of Viking ships. When possible, they simply followed the coastline, staying far enough from the shore to shoals and reefs. Place-name evidence indicates that prominent landmarks on the shore aided navigation. Most of the raids on Francia and England could have been carried out in this fashion.

it has long been assumed that the long open sea voyages, where the ship might be out of site from land for several days, where made without any navigational instruments. Certainly, the use of the magnetic compass was not recorded in Western Europe until the late 12th / early 13th centuries. The Hauksbók and other medieval Icelandic sources mention a sólarsteinn (sunstone) which seems to have been a crystal that allowed the sun to be accurately located even when hidden behind cloud. The sólarsteinn was thought by many scholars to be legendary, but the discovery of a piece of Icelandic spar in a late 16th century shipwreck off the Channel Islands has led some researchers to claim that the stories of the sólarsteinn are true. (See also: ‘Not just the stuff of legend‘)

Viking seafarers knew how to use the altitude of the sun at midday and the stars to estimate latitude which was helpful when sailing to a destination of known latitude. Depth sounding was probably used in the Baltic Sea, but not in the deeper waters of the Atlantic.

Viking navigators were close observers of sea and weather conditions. The behaviour of sea birds could indicate the presence of land nearby, and cloud formations in an otherwise cloudless sky could suggest land just over the horizon.

However, one must remember that the Vikings were often at the mercy of the weather and shipwrecks were common. The discoveries of Iceland, Greenland and Vinland were all made when Viking ships were blown off course during extreme weather conditions 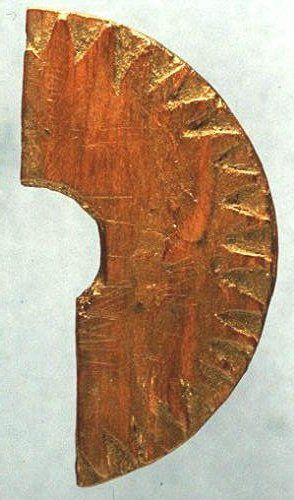 In 1948 archaeologists discovered a fragment of a wooden disk (photo right) on a site in Greenland that had been occupied by Norse settlers in the 10th century. This disk has been interpreted by some scholars as a simple form of sun compass, but a recent study suggests that it might be a device for determining latitude, rather than locating north.
(See also: ‘Mysterious sundial may be secret to Viking navigation‘)