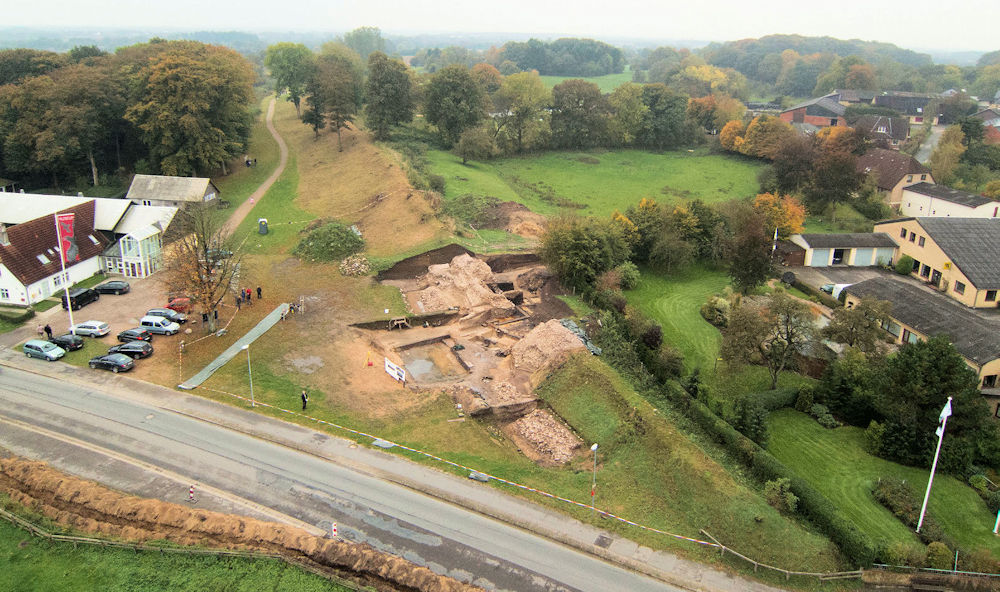 The excavation site in 2013 seen from the east. The Main Rampart of the Danevirke runs from south-west to north-east. Today it is crossed by a modern road named ‘Ochsenweg’.
(click on the images to enlarge)

Between 2010 and 2014, the State Archaeological Department of Schleswig-Holstein in Germany jointly undertook excavation work with the Danish Museum Sønderjylland – Arkæologi Haderslev on the linear earthwork monument, the Danevirke.

When excavations started in 2010, a 5−6m wide gap was found, which later proved to be the remains of the opening where the Ox Road/Army Road originally crossed the Main Rampart of the Danevirke (Tummuscheit 2011: 84−87: Tummuscheit and Witte 2014a, 2014b) (Figure 2). Surely, as this was one main crossing point of the earthwork it is likely that it is the site of the gate mentioned in the Royal Frankish Annals in the year AD 808 (Scholz 1972) (Figure 3).

During the following years, the main focus was on the investigation of this possible gate and passageway through the earthwork.
A large section through the entire rampart was also examined which included its earliest building phases, as well as excavation of a large area which lies south of and in front of the rampart and gate.

One of the central aims of the excavation and the current post-excavation work is to gain a better understanding of the Danevirke’s chronology, in order to relate the site’s history and development to specific historical events.

It is commonly understood that the oldest part of the Main Rampart has a sequence of two building phases, a result derived mainly from excavations by Günther Haseloff in the 1930s (Haseloff 1937) and Hellmuth Andersen in the 1990s (Andersen 1998). The recent excavation has shown, however, that this rampart was probably constructed more or less in one main phase using the same building technique.

The oldest earthwork (Phase 1/2) consists of sandy layers upon a cultural layer. The original ground surface was removed over almost the entire excavated area, probably to be used for the stabilization of the top of the wall. In the cultural layer there were post-holes and plough-marks. No material suitable for radiocarbon dating was found in these ramparts or the cultural layer. To the south, right in front of the wall, was a ditch belonging to this phase. It was about 2.8 m wide and only about 0.5m deep.

It was not possible to extend the excavation area to where the gateway crosses the oldest earthen phase (Phase 1/2), because it is on private property. It does seem though that the rampart was considerably lower than it is a few hundred metres to the west, which could be a vague indication of some sort of disruption of the earthworks in this area rather than variation in its original design.

The turf wall is the second main phase of the Main Rampart, traditionally termed Phase3. It was placed in front (south) of the oldest earthwork and on top ofthe earliest ditch. In the gate area, both endings of this second rampart, definitely have a purpose-built gap, showing that a gate or opening already existed by this early stage, if not demonstrably in Phase 1 / 2.

As this fortification was made of burnt heather turf, five samples were taken in order to determine radiocarbon dates for its construction (see Tummuscheit and Witte 2013: 146−66, 2014a, 2014b). The results revealed a date around the fifth and sixth centuries AD (Holst 2013: 147−48). Two sixth-century dates may hint that the wall was made taller sometime after the building of the wall. There had been suggestions of an early dating of the Danevirke among scholars before (i.e. Harck 1998; Madsen 2008: 40), but until the new radiocarbon dates there was no direct evidence for it and the generally accepted view was that the upstanding element of the Danevirke began c. AD 700 (e.g. Dobat 2008: 38−40).

This early dating of the Danevirke means that the origins of the monument need to be fundamentally reassessed and we must re-evaluate the context in which it was first established. In particular, the origins of the Danevirke (fifth century) and the origins of the settlement of Hedeby (middle/late eighth century) cannot be connected any longer (‘initial phase’: Dobat 2008: 48). This also means that the theories of pressure from the Slavonic immigration and potential threat from the Frankish Empire can no longer serve as a possible impetus for constructing the first rampart, although these factors remain potential contexts prompting the later large enhancements and reinforcements to the Danevirke some hundred years later (Dobat 2008: 50). 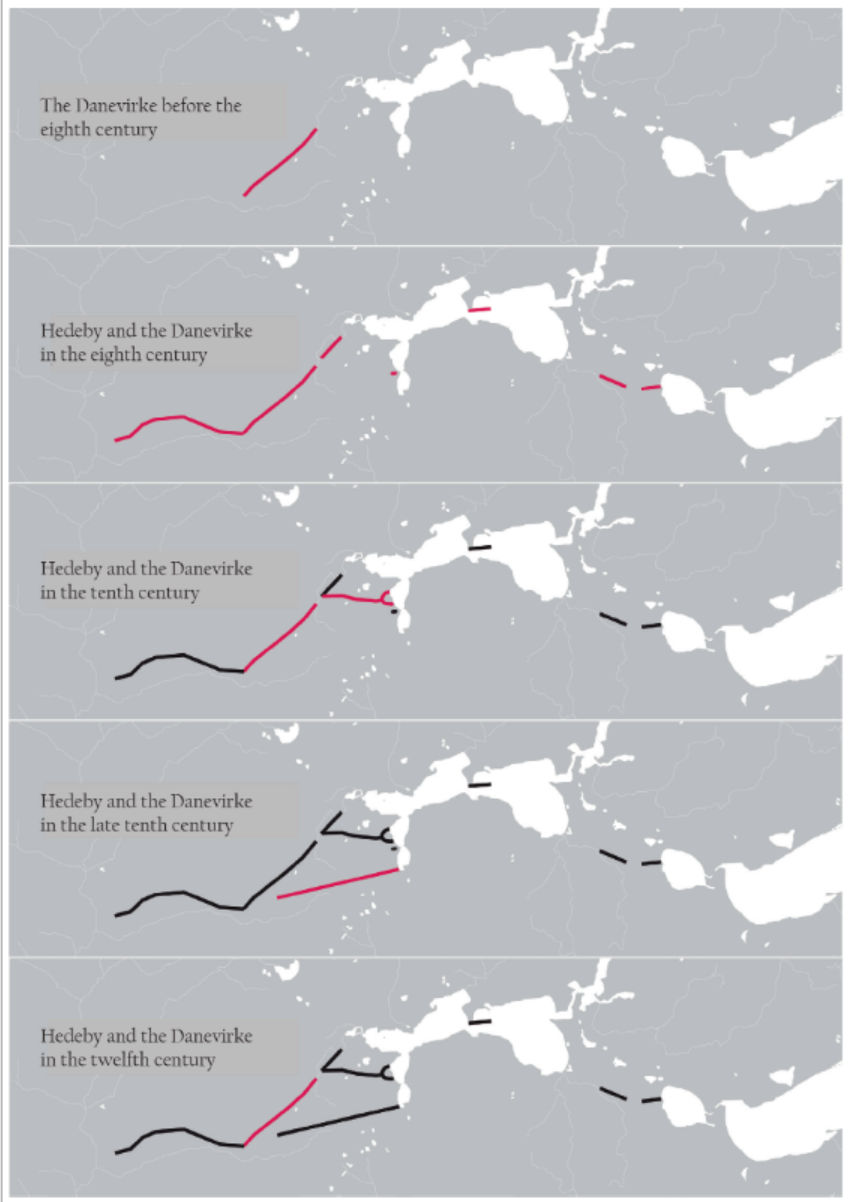 Construction stages of the Danevirke. Red are new stages, black are existing or former stages, some of which may have persisted in use into subsequent centuries (after Maluck and Weltecke 2016: 91). 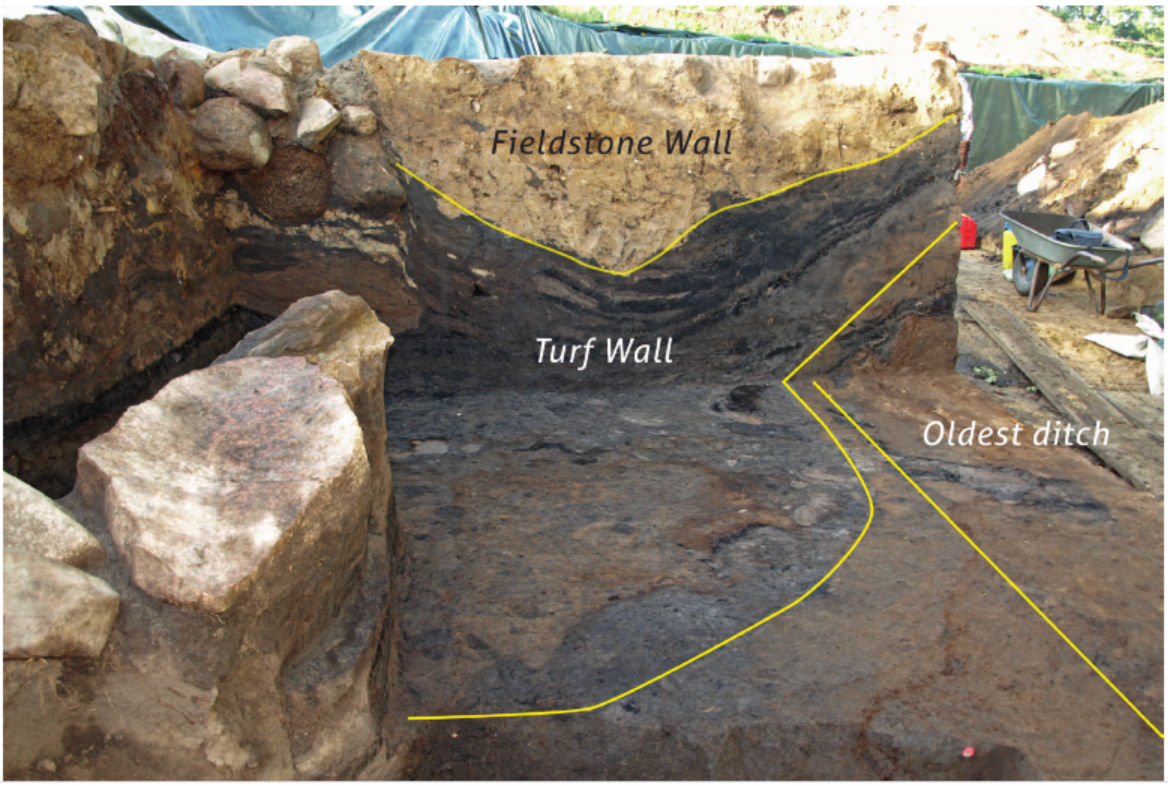 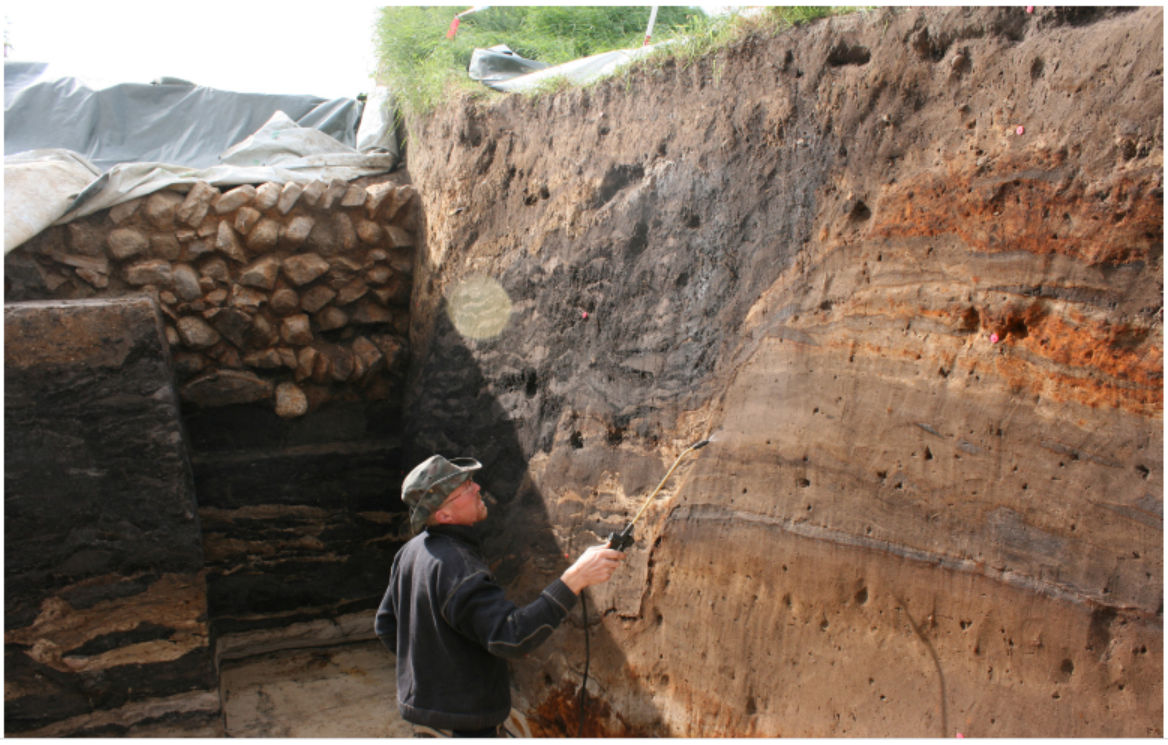 The section of the Main Rampart of the Danevirke and the back of the Fieldstone Wall as seen from the north. The height of the remains of the ramparts plus Fieldstone Wall is almost 4m