The Varangians (Old Norse: Væringjar) was the name given to the Norsemen who travelled south and east through what is now Russia, Belarus and Ukraine.

A treaty of 911 refers to those Varangians who wished to enter military service with the Byzantine emperor, although there are references to Varangians fighting for the Byzantines in Crete in 902. However, it is Basil II (reigned 976 to 1025), who is credited with the formation of a separate Varangian Guard in 988. (Ellis Davidson, H.R., “The Varangian Guard”, in “The Viking Road to Byzantium”, 1976, p. 179)

Greek sources sometimes refer to the Guard as ‘axe-bearing barbarians’, or those who ‘dangle their swords from their right shoulders’. (ibid. p. 180) It is likely that an illumination from the 11th century chronicle of John Skylitzes, showing axe-bearing soldiers is intended to represent the Varangian Guard.

Although the Sagas imply that being a Norseman was enough to gain admittance (e.g. Grettis Saga, 86), it was not easy to become a member of the Varangian Guard. It was necessary to pay an entrance fee, although the rate of pay and special gifts at Easter and at the coronation of a new emperor meant that this would be recovered after some years in service. (ibid. pp. 181 – 182)

“Probably the most extraordinary aspect of the Varangian Guard is the fact of the personal protection of the Basileus (as the Byzantine emperor was formally styled in Greek), who was ‘held to be the sole legitimate sovereign of the Christian world’ and represented as ‘the earthly counterpart and vice-regent of the Christ Pantokrator’, having been entrusted to fighting-men out of the remote northland whose two best-known characteristics were their mighty battle-axes and their notorious appetite for alcohol.”

Scandinavians could hold various offices in the Guard, although it appears that the highest ranks were reserved for members of noble Greek families. (ibid. P. 182)

In addition to serving as the personal bodyguard of the emperor, the duties of the Varangians included serving as palace door guards, accompanying the emperor to festivals and celebrations and accompanying the Imperial family to church services at Hagia Sophia. Membership of the Varangian Guard was a great honour, and men who wielded considerable power and status in their homelands were proud to serve in its ranks. Probably the most famous member of the Varangian Guard was Harald Hardrada, later Harald III of Norway, who became Akolythos, the commander, of the Guard before returning home in 1043.

The Varangian Guard continued until the Crusade broke the great city of Constantinople in 1204. Some mentions of a remnant of the Varangian Guard can be found in the historical record until as late as 1453, but it was no longer the mighty fighting force of Viking warriors that it had once been. 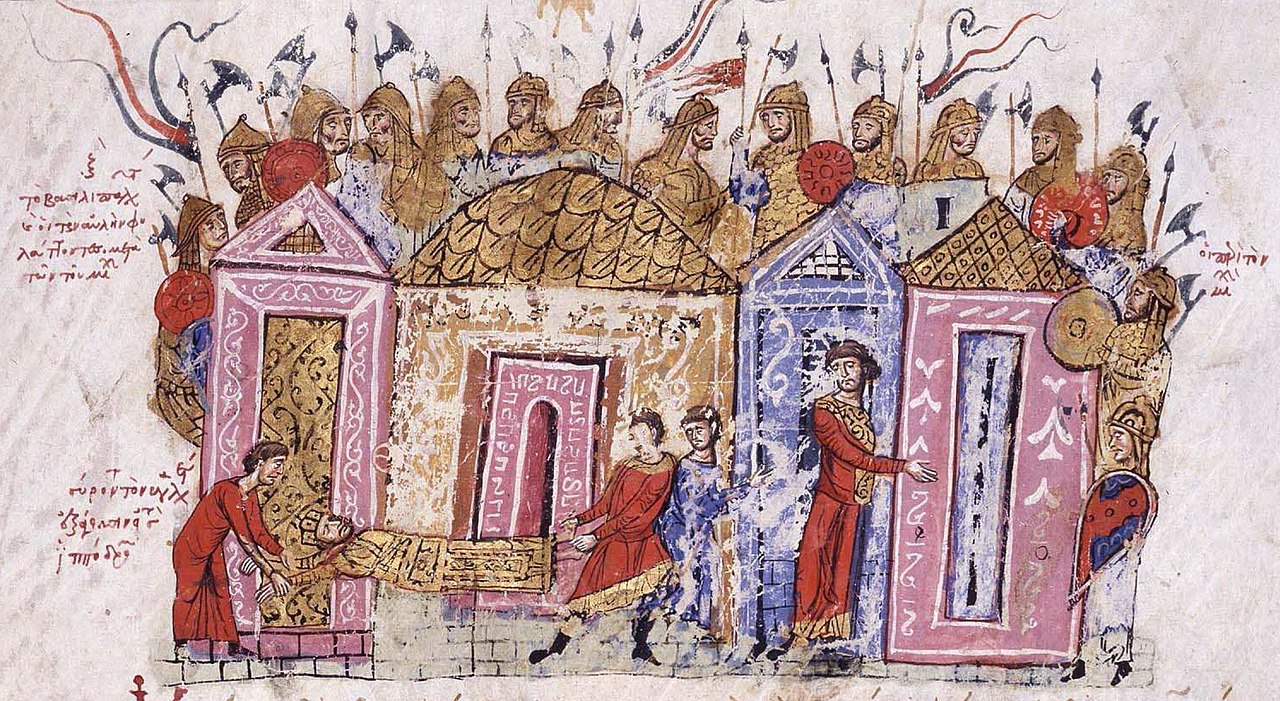 Varangian Guardsmen, an illumination from the Skylitzis Chronicle (Wikimedia)
Click on image to enlarge