The Forsa Rune Ring
the earliest written law in Scandinavia 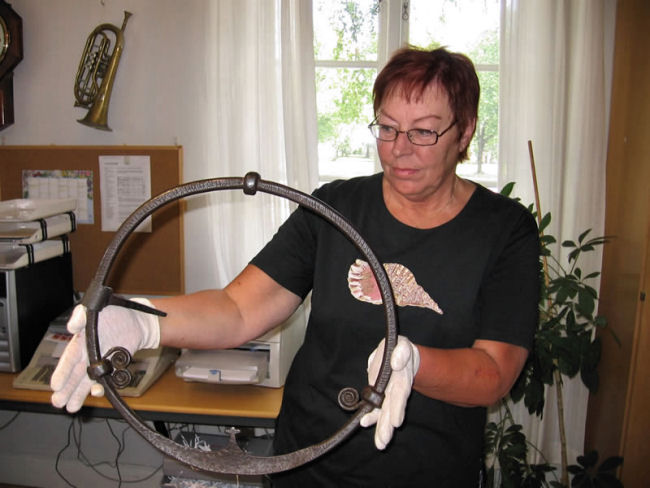 The Forsa Rune Ring
(click on the image to enlrage)

The Forsa Ring originally hung on the door of the parish church of Forsa in the Province of Hälsingland, northern Sweden. It is now in the parish office and a copy is kept in the church.

The ring is made of iron and is 43 cm in diameter. The inscription contains almost 250 runes.

The ring was mentioned in 1599 and the runic inscription was published and c.1700 by Olof Celcius.

The runes on the ring are the same type as those on the Rök runestone in Östergötland which date to c. 800.

Despite the early nature of the runes, the inscription was, for a long, time assumed to date from the Christian period. This was based on a reading of the inscription made by Sophus Bugge in 1877. In Bugge’s translation two key words: staf (bishop’s staff) and lirþir (the learned, or clergy), seemed to point to a Christian context for the inscription.

However, in the 1970’s, Aslak Liestøl proved that Bugge’s reading of lirþir was incorrect, and that the inscription should read liuþir (the people). This removed any Christian context for the inscription, and the Forsa Ring is now seen to date to the 9th century.

The inscription on the Forsa Ring is of considerable importance and seems to be a unique example of an early law-rule.

The inscription transliterates as: 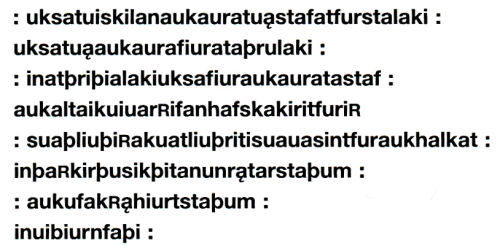 Which may be translated as:

One ox and two aura [in fine] [to?] staf [or] aura staf [in fine] for the restoration of a cult site (vi) in a valid state for the first time; two oxen and four aura for the second time; but for the third time four oxen and eight aura; and all property in suspension, if he doesn’t make right. That, the people are entitled to demand, according to the law of the people that was decreed and ratified before.
But they made [the ring, the statement or?], Anund from Tåsta, and Ofeg from Hjorsta. But Vibjörn carved.
(the translation is by Stefan Brink)

This is obviously a legal text, and it has been suggested that it relates to the maintenance of a vi, a cult and assembly site

Failure to restore the vi in the correct manner results in a fine: one ox and two aura (ørar) the first time; two oxen and four aura the second time and four oxen and eight aura for the third time. Failure to pay the fine resulted in the suspension of the offender’s property.

Brink points out the importance of the phrase: “suad liudir æigu at liudrétti” “that, which the people are entitled to demand according to the people’s right”, i.e. the law of the land – in this case, Hälsingland. This seems to support Snorri Sturluson’s statement, that different lands had different laws in early Scandinavia.

It is interesting that a law-rule relating to a vi should be inscribed on a ring. There are a number of documentary references to a “sacred ring”, particularly in the context of swearing an oath. For example, when King Alfred made peace with the Viking army at Wareham, the Anglo-Saxon Chronicle states:

(“The king made peace with the raiding-army, and they swore him oaths on the sacred ring, which earlier they would not do to any nation, that they would quickly go from his kingdom”)

In the Poetic Edda there are two references to swearing a ring-oath: in Hávamál it says “I think that Othin swore a ring-oath”; and in Atlakviða there is a reference to an oath sworn on Ullr’s ring.

The mention of the little-known god, Ullr, in this context is particularly interesting. In 2007 excavation of a site at Lilla Ullevi (“Ullevi = the vi, or sacred site of Ullr”) revealed an important cult site dating to the Vendel and Viking periods. Among the finds were 65 amulet rings. (You can find a brief report of the excavation here, and a picture of the rings here.)

Kjalnessingasaga describes the importance of this ring:

“On the altar [in the hof] must be a great ring, made of silver, which the temple godi should have on his hand at every meeting of men, and on it all men should swear oaths at any witness giving.”

A similar description is given in Eyrbyggja Saga:

“[in the hof] there stood a stall in the midst of the floor in the fashion of an altar, and thereon lay a ring without a join that weighed twenty ounces, and on that must men swear all oaths; and that ring must the chief have on his arm at all man-motes.” Ch. 4

and in Ch 16 of the same saga, Arnkel the Priest swears an oath on the ring that Geirrid was not responsible for Gunnlaug’s injuries.

This has led to the following interpretation of the Forsa Rune Ring by Blomkvist et al:

“This rune ring was most probably used at the þing site for the whole province of Hälsingland at Hög with its þing mound, and it is tempting to think it is an example of a prehistoric oath ring.”

Part of the rinic inscription
(click on the image to enlrage)