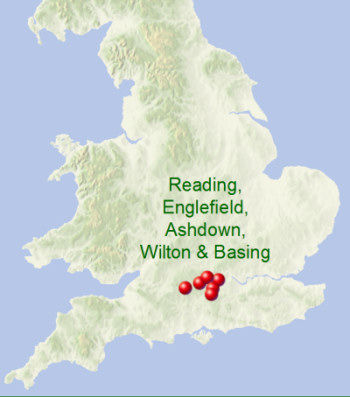 And about four nights after this, King Ethered and Alfred his brother fought with all the army on Ashdown, and the Danes were overcome. They had two heathen kings, Bagsac and Healfden, and many earls; and they were in two divisions; in one of which were Bagsac and Healfden, the heathen kings, and in the other were the earls. King Ethered therefore fought with the troops of the kings, and there was King Bagsac slain; and Alfred his brother fought with the troops of the earls, and there were slain Earl Sidrac the elder, Earl Sidrac the younger, Earl Osbern, Earl Frene, and Earl Harold. They put both the troops to flight; there were many thousands of the slain, and they continued fighting till night. Within a fortnight of this, King Ethered and Alfred his brother fought with the army at Basing; and there the Danes had the victory. After this fight came a vast army in the summer to Reading. And after the Easter of this year died King Ethered. He reigned five years, and his body lies at Winburn-minster. Then Alfred, his brother, the son of Ethelwulf, took to the kingdom of Wessex. And within a month of this, King Alfred fought against all the Army with a small force at Wilton, and long pursued them during the day; but the Danes got possession of the field. This year were nine general battles fought with the army in the kingdom south of the Thames; besides those skirmishes, in which Alfred the king’s brother, and every single alderman, and the thanes of the king, oft rode against them; which were accounted nothing. This year also were slain nine earls, and one king; and the same year the West-Saxons made peace with the army.