The Founding of Normandy

The origins of the Duchy of Normandy lie in the Treaty of Saint-Clair-sur-Epte in 911. In June 911 the Viking leader, Rollo, laid siege to Chartres. Rollo was defeated in battle in July, and the French King, Charles the Simple, offered land to Rollo as the first Duke of Normandy in exchange for his loyalty to the king of West Francia.

The treaty granted Rollo and his soldiers all the land between the river Epte and the sea “in freehold and good money”. It also granted him Brittany “for his livelihood.”

The initial grant was extended by further grants and Rollo’s descendants created the area as coherent political entity during the course of the 10th century.

As late as the early 11th century Normandy still retained political and economic connections with Scandinavia and Scandinavian settlers in Britain and Ireland. However, monasteries were being refounded and the nature of government was becoming more Frankish as the process of cultural assimilation was taking place.

Around this time, Normandy developed into the centre of a movement of conquest and colonisation in the Mediterranean and Britain – a process which continued into the early decades of the 12th century.

See also: The Normans: the warriors of the North to conquer the Mediterranean 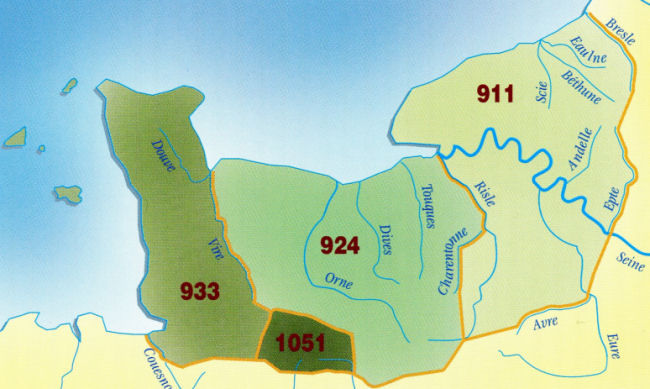 The development of the Duchy of Normandy.
Image: Wikipedia Commons (click on the image to enlarge) 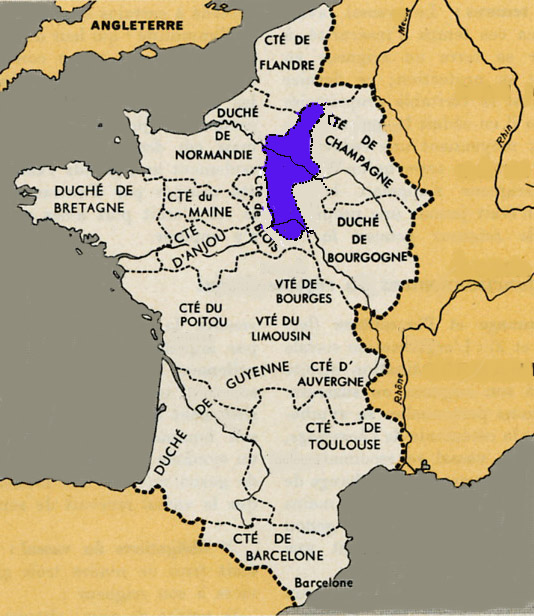 The Kingdom of France in the late 10th century. The Royal domain is marked in blue. Image: Wikimedia Commons
(click on the image to enlarge)