The residence included a great hall and a small enclosed area with a cult building. Cult activities were performed in this small building, and statues of gods and cult objects may have been kept here.
Numerous animal bones and fragments of drinking glass have been found in the great hall. This indicates that great feasts were held here. A large pile of stones, which had been subjected to heat, was located outside the hall. The stones may have been used in connection with ritual feasts and sacrificial activities in the hall.
A ritual landscape
Several cult sites, which have produced evidence of ritual activity, have also been found in the landscape surrounding the magnate’s home. (See: Cult Sites near Tissø)
Weapons and jewellery were recovered from the lake known as Tissø (meaning ‘ Týr’s lake’). They were thrown into the lake at some point during the Viking period. Týr was the Viking god of war and the numerous swords, lances and axes were probably an offering to him. Weapons and smith’s tools have also been found nearby, at the Viking bridge over the River Halleby. The smith was highly regarded in Viking society and his work was considered as holy.
On a hilltop a few hundred metres from the magnate’s residence, another sacrificial site has been excavated. This was an open “hørg”. A thick layer of animal bones was found, which has been interpreted as the remnants of ritual feasts. Offerings of silver objects, coins, jewellery and tools were also recovered on the hill.
The Viking cult activities at the magnate’s residence and in the surrounding area at Tissø display great variations. At least four different sacrificial sites were used simultaneously. The cult site that was used and the nature of the offerings may have depended upon the time of year and on which gods were being sacrificed to. The offerings on the hilltop may have taken place at the summer solstice on the 21 June, whilst the great hall (“hovet”) was probably used for sacrifices at the winter solstice on 21 December.
New times
For almost 500 years, from 550 AD onwards, the magnate’s residence functioned as the centre of the pre-Christian cult in the Tissø area. Around 1000 AD the pre-Christian cult structures were apparently demolished and taken down. They were replaced by a small Christian chapel or church – a square stave building measuring only 7 x 7 m. This was probably one of the first private churches in Denmark. Sacrificial activities also ceased at the cult sites in the surrounding landscape around this date. Time was running out for the Norse gods and Christ was ready to replace them.
(Text from the National Museum of Denmark) 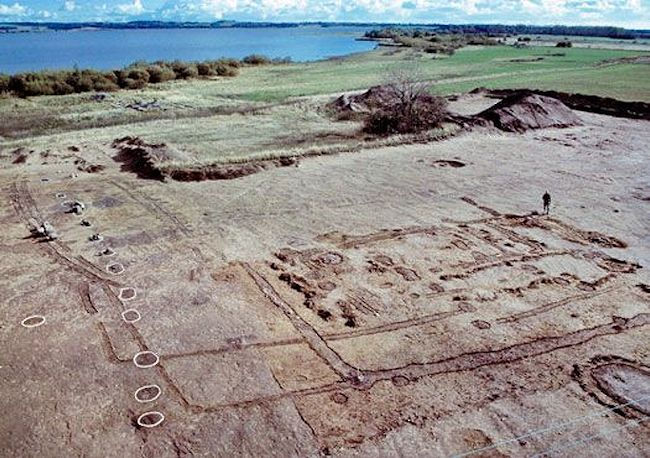 At Tissø the magnate’s hall was closely connected with a small cult building surrounded by a fence. This connection between the hall and cult enclosure was maintained for several hundred years and was only broken with the last rebuilding of the magnate’s residence in the second half of the 10th century AD.
(click on the image to enlarge) 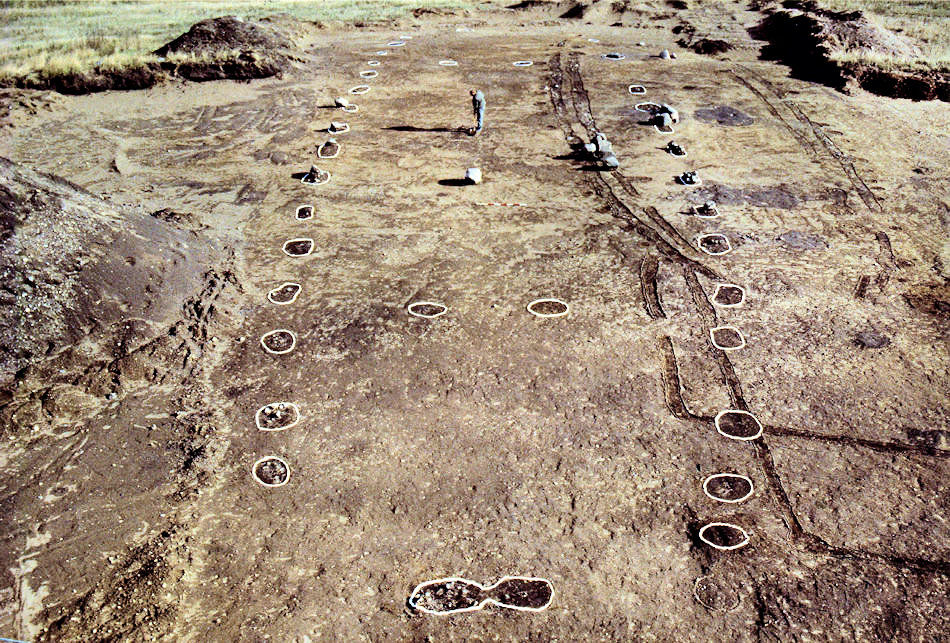 Excavation of the 500 m2 great hall at Tissø. Traces of the sturdy timbers that the hall was built from show as dark patches in the light natural subsoil.
(click on the image to enlarge) 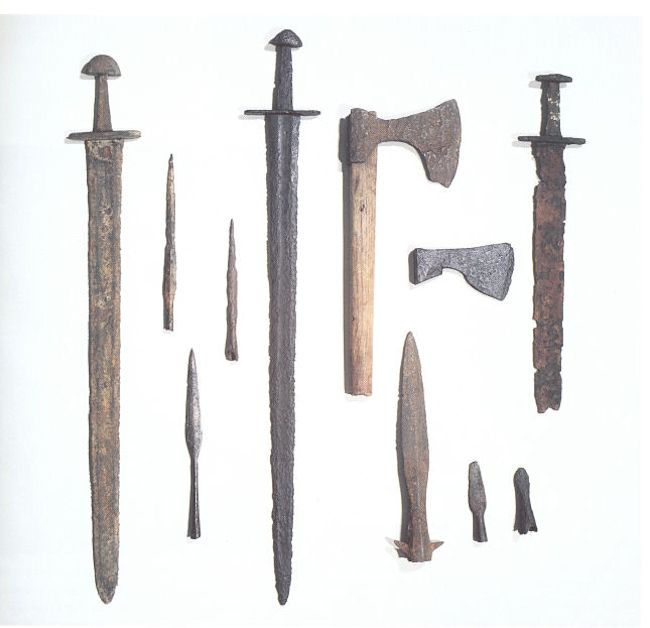 Weapons from Lake Tissø
(click on the image to enlarge) 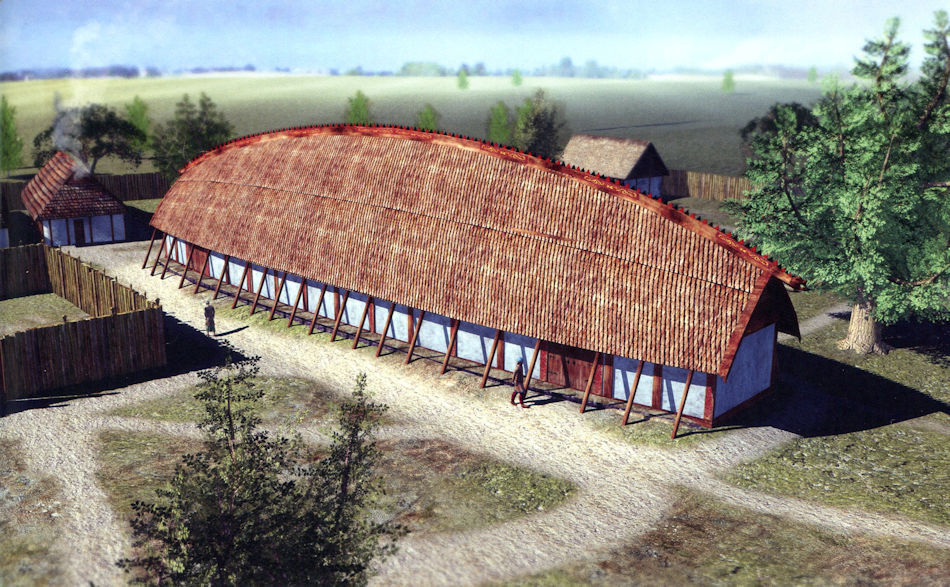 Replica of the hall
(click on the image to enlarge) 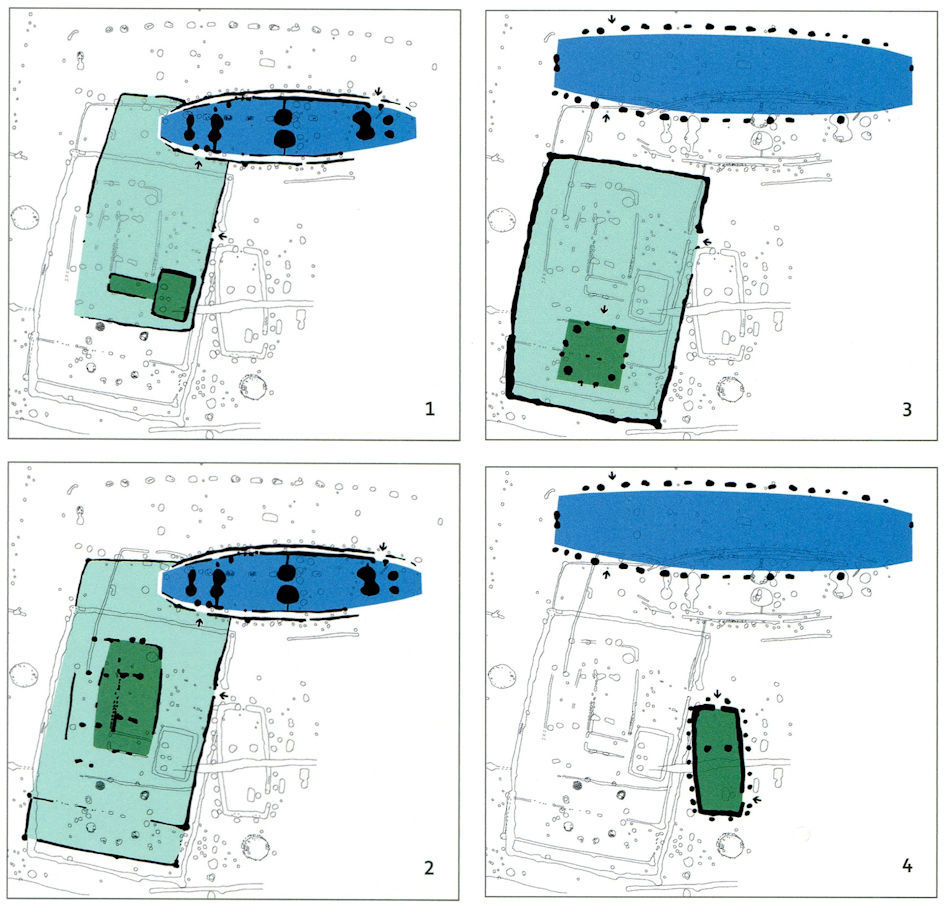 Tissø Phase Plan
(click on the image to enlarge)