Staraya Ladoga was an important trade centre of the eastern Baltic during the early Middle Ages. It is located in northwestern Russia at the eastern end of the Baltic.

The town functioned as a gateway between the Baltic Sea and Russian river routes to the Black Sea. Staraya Ladoga’s economy was based on trade and the production of trade goods and finds of silver, scales and weights show that this was a place of interchange between merchants.

Finds of raw materials, tools, manufacturing debris and various products found at different stages of completion, rejected showed that the town was an important craft centre and most of the excavated houses showed some signs of manufacturing.

Excavation have shown a detailed picture of the development of Staraya Ladoga. The earliest phase, dated to c. AD 760 was an earthwork fortification protecting the harbour.

In the 840s the settlement expanded, and these two areas continued in use throughout the medieval period.

In the ninth and tenth centuries the settlement shows more urban characteristics – wooden fortifications were built in the 860s. These were replaced by stone fortifications in 882. In the tenth century a rectangular street grid was constructed. At this time, the population is estimated to have been c. 1,000. 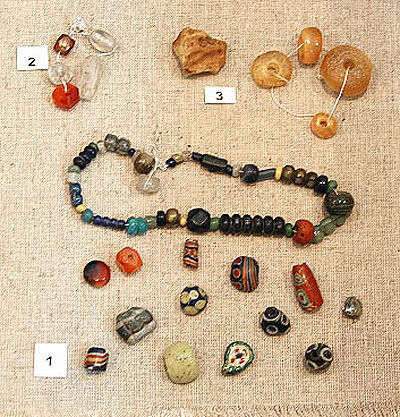