The Binding of Loki – (west side)

The gods were outraged at Loki’s behaviour. Eventually they captured him.

‘Taking three flat stones, the gods set them up on end and bored a hole through each. Then Loki’s sons were captured, Vali and Nari or Narfi.’

The Æsir changed Vali into a wolf and he tore asunder his brother Narfi.

The Æsir took his entrails and with them bound Loki over the edges of the three stones – one under his shoulder, the second under his loins, the third under his knee joints – and these bonds became iron. Then Skaði took a poisonous snake and fastened it up over him so that the venom from it should drop on his face.

His wife, Sigyn, however, sits by him holding a basin under the poison drops. When the basin becomes full she goes away to empty it, but in the meantime the venom drips onto his face and then he shudders so violently that the whole earth shakes – You call that an earthquake. There he will lie in bonds until Ragnarök.

The Christian idea of “Bound Satan”

‘And I saw an angel coming down out of heaven, having the key of the abyss and a great chain in his hand. And he laid hold on the dragon, the old serpent, which is the Devil and Satan, and bound him for a thousand years, and cast him into the abyss, and shut it and sealed it over him, that he should deceive the nations no more: until the thousand years should be finished: after this he must be loosed for a little time’ (Rev 20:1-3).

“Genesis B” or “The Fall of the Angels”

But bands of iron crush me down, the bondage of my chains is heavy. I am stripped of my dominion. Firmly are hell’s fetters forged upon me. 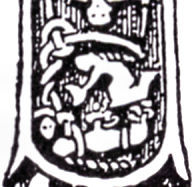 Next Page: Scenes from Ragnarök