The forgotten god Ullr has found himself in the spotlight once more. An archeological dig in Bro, Uppland, outside Stockholm has brought to light a cult site dedicated to him.
“As far as I know, this is the only place in Sweden and perhaps Scandinavia that demonstrates this degree of preservation,” says archeologist Mathias Bäck of the Royal Department of Antiquities, who acted as leader of the excavation.

Even the name suggests mysteries. Little Ullevi in Bro was the location of an ancient cult site of uncommon size. The etymological meaning of the place name is “place that is sacred to Ullr.” In a project uniting etymology with the history of religion and archeology, the Royal Department of Antiquities excavated the site and found precisely what the name implied.

The site includes remains from four different periods, starting in the fifth century and extending to the seventeenth century. But the most noteworthy are the collection of stones that the archeologists have uncovered from the Vendel and Viking periods.
These take the form of a platform with two stone “wings” with four large post holes in front. It is thought that a large wooden construction stood there. In addition, 65 amulet rings have been discovered in the vicinity. (See picture here…)

“It’s hard to say what significance the amulet rings may have had. But there are suggestions that people used the rings to swear oaths, for example to bear witness that someone had not committed any crime, or to forge an alliance with someone,” says Mathias Bäck.

Ullr is barely mentioned in accounts of the Æsir, and accounts of him are full of contradictions. He is associated with conflict and tends to be represented with a shield or with skis or snowshoes on his feet.

“Ullr is not mentioned as often as Odin or Thor, but belongs to the same tribe of gods. He also has an association with another group of gods, the so-called Vanir. Ullr is a somewhat mysterious figure who moves between the tribes of gods. What we are speculating is that he may have been an East Scandinavian god who was honored locally in eastern Gautland,” reports Mathias Bäck. 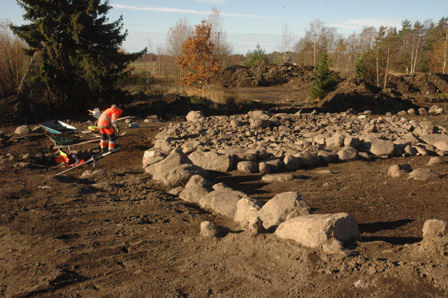