Jorvik: the Viking City of York

Between 1976 and 1981 the York Archaeological Trust conducted excavations at 16 – 22 Coppergate, York in advance of the construction of a new shopping centre.

The site lay outside of the Roman legionary fortress, but proved to be within the thriving heart of the Anglo-Scandinavian town.

The Vikings conquered York on 1 November 886 and it remained under Vikings control for almost a century, including a second wave of Viking invaders from Ireland in c. 917 which strengthened its links with Dublin.

Although York lies c. 60 km from the coast, it was an important port linked by the River Ouse to the Humber Estuary. The port had long-standing links to continental Europe.

The waterlogged conditions of the Coppergate site resulted in excellent preservation of organic material, including buildings of post and wattle, or timber construction.

These buildings were laid out along the street of Coppergate, each within its own long, narrow plot – the boundaries of these plots were demarcated with fences. By the early 10th century this part of York was intensively settled.

Until the mid-10th century, the typical house was a post and wattle constructed, single storey building at least 7 m long by c. 4.5 m wide. Upright posts supported the thatched roof, and the walls were made of wattle withies woven horizontally through the posts. In some cases an earth bench, within a revetment of wattles ran along the side walls. Each building had a long central hearth, and the floors were trodden earth.

storey buildings, in which the lower storey was a semi-basement. This semi-basement was built of wooden planking and upright timbers, and was possibly used for storage.

The excavations produced c. 40,000 finds, the most famous single find being The York Helmet. Many of the finds show evidence of cottage industry, including industry, including metalworking, jewellery making and the manufacture of wooden cups and bowls. It was this last industry that gave the street its name: Coppergate means ‘street of the cup-makers’. (See finds from Coppergate.) The excavation revealed hundreds of wooden cores – the debris of turning bowls and cups on a pole-lathe. The quantity of these finds indicate that these objects were being mass-produced on a commercial scale.

Much of Jorvik’s wealth came from long-distant trade in luxury goods. The Vikings had a much more extensive range of overseas trading contacts than their Anglo-Saxon predecessors and, as a result, York’s importance as a port increased.

The goods imported included lava quern stones, Baltic amber, German wines Byzantine silks and brooches from various countries. Click on the map on the right to see the varies countries of origin for this trade.

By 1066 the population of York was probably c. 15,000 or more. It was, after London, the second largest and wealthiest city in England. 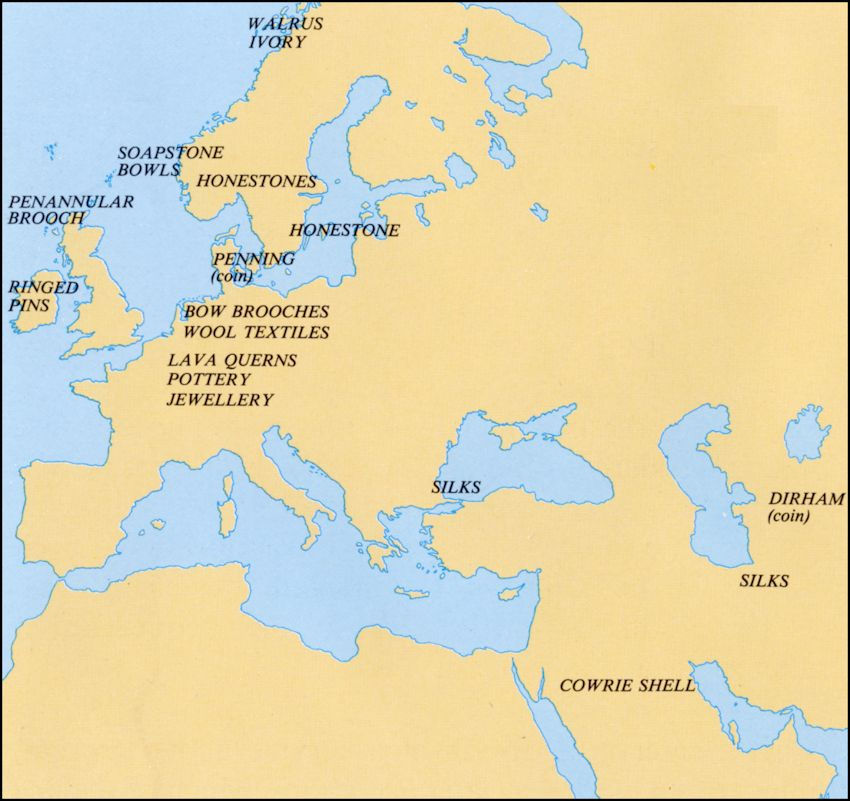 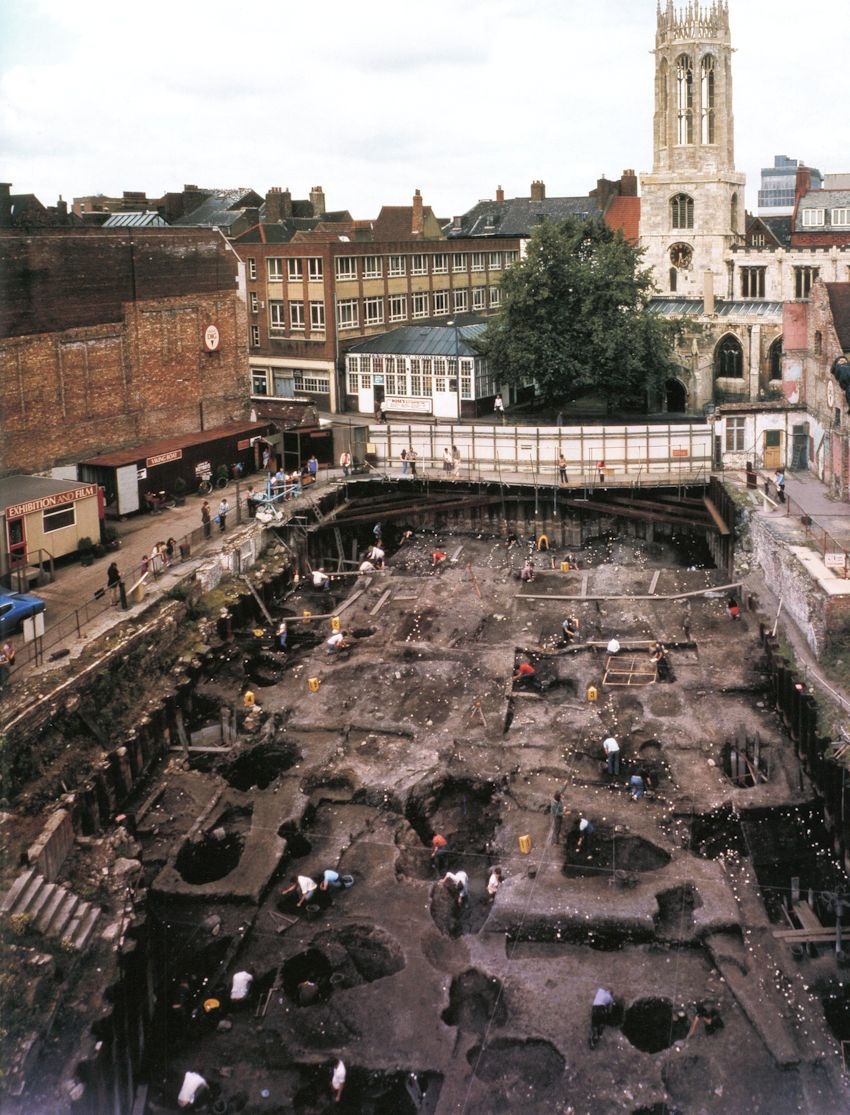 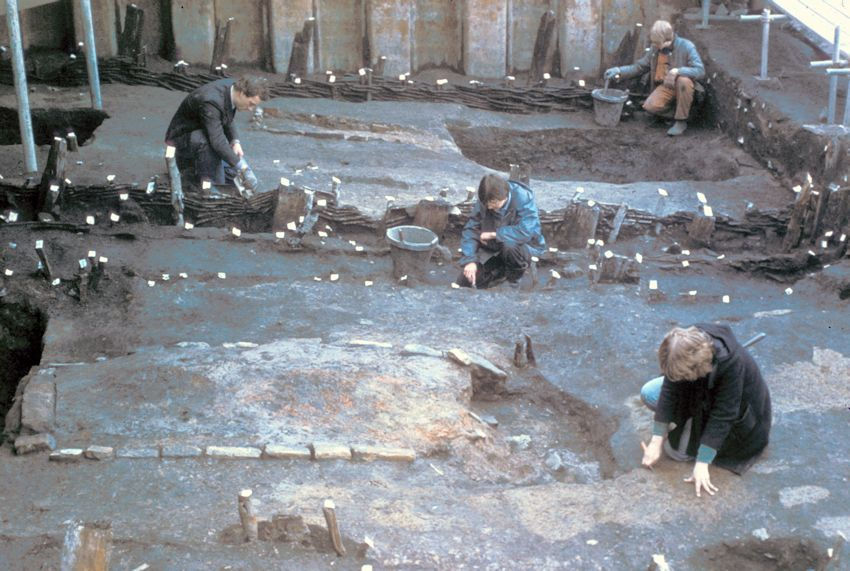 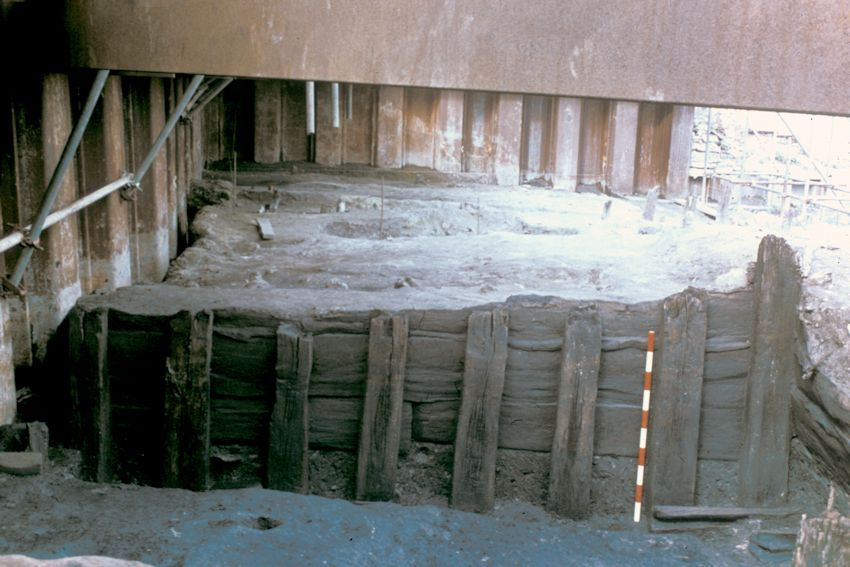 Next Page: Finds from the Coppergate Excavations