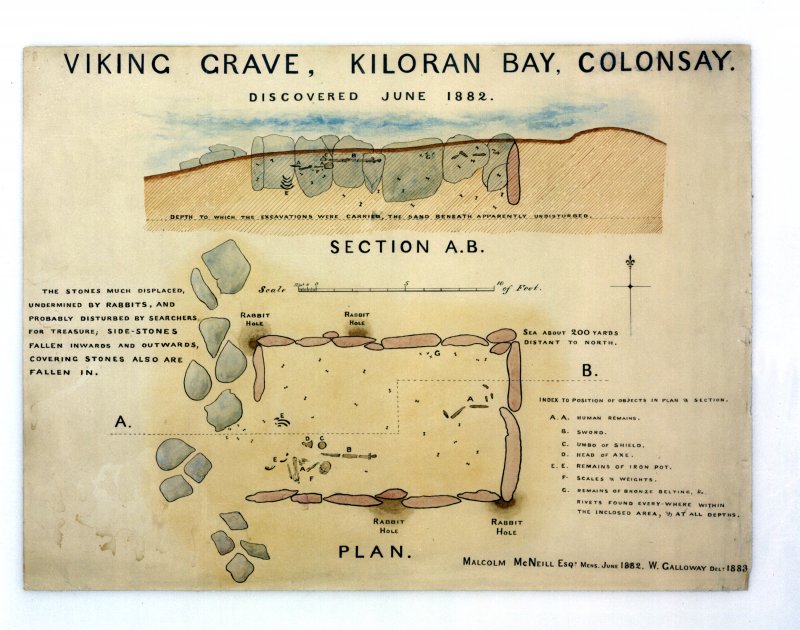 In 1882 a Viking ship burial was discovered at Kiloran Bay. It was excavated by Sir M McNeill and W Galloway.

The burial consisted of a boat inverted over an irregularly rectangular stone setting, which enclosed a male burial accompanied by grave goods and a horse. The whole structure was covered by a mound of sand.

Only the rivets and clinker-nails remained of the boat, but the stone setting 15′ x 10′ and set slightly into the sand, was complete and consisted of rough schist slabs, two of which, one at each end, bore crude incised crosses. The human skeleton lay crouched on its left side, with a set of scales (with weights made from enamelled ornaments of Irish origin) lying between the knees and skull, and various weapons and ornaments, etc of iron and bronze lay nearby. They included bronze mountings probably for horse harness.

After the excavation three Anglo-Saxon stycas of the mid-9th century were found within the enclosure and may provide an approximate date for the deposition although Schetelig preferred an early 10th century date.