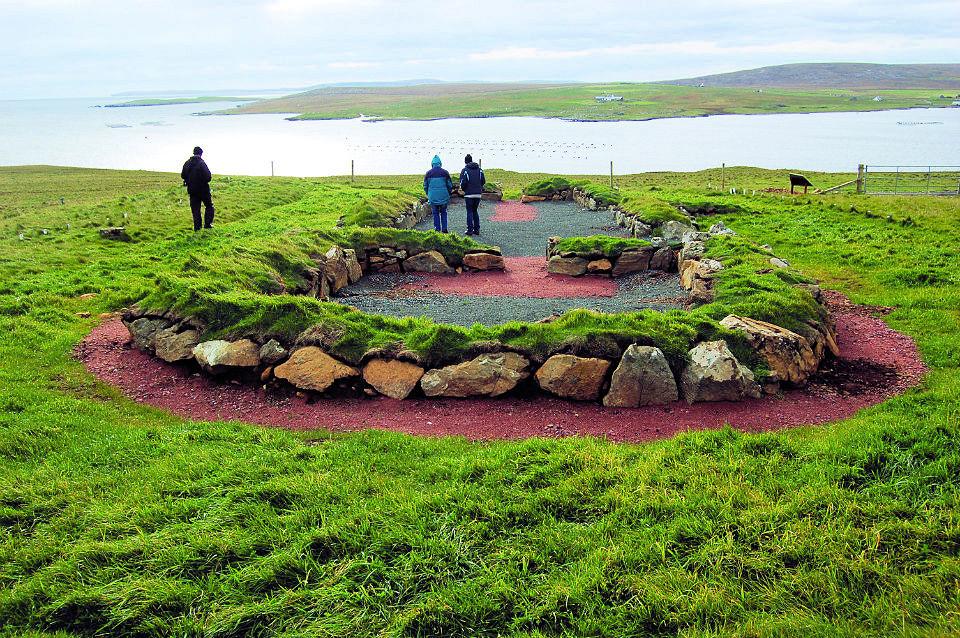 Excavations at Hamar
(click on the image to enlarge)

The monument known as Hamar, Norse settlement ENE of, Baltasound comprises the remains of a Viking period settlement, probably dating from the 9th to 10th centuries AD. The remains take the form of the foundations of a bow-walled longhouse, several lesser buildings and enclosure walls.
The site has been known locally for many years as Yakob Yahorasons or Yahorabsons.

HP 6463 0933 Excavation of the site of Hamar in Unst (part of the Viking Unst Project) continued in 2007. Previous work had defined the structural elements of a longhouse, now referred to as Hamar House 1 (Area A).

In addition to the excavation of House 1, a second structure, higher up the slope to the north west identified as potentially Norse by Bond and Turner in 2003 and known as House 2, was investigated (Bond et al 2006: 3). House 2 seems to consist of a late, small structure overlying an earlier house with an associated yard boundary, both structures lying roughly E–W across the slope on slightly different alignments.

House 1 The preliminary excavation of the structure in 2006 revealed a sub-rectangular building divided internally into an upper and lower room and aligned roughly N-S on a small terrace (Bond et al 2006). Previous excavation within the upper room had partially reopened the trial trench excavated by Stumann Hansen (2000). In 2007 this trench was completely re-excavated, giving a section through the stratigraphy of the upper room for recording and sampling The large tumbled stones which filled the northern part of the upper room were also removed, revealing a set of later features including a fragment of double-faced wall running across the upper part of the room from the W wall, a secondary wall lining or base for a platform running N–S parallel to the E wall and a large stone setting in the centre of the room, perhaps for a single large post. These features seem to form a small inner room and are stratigraphically later than the ashy floor layers seen in Stumann Hansen’s trench. Extensive rabbit damage was seen in these late contexts and also in the upper part of the fill