The Vikings in Cork 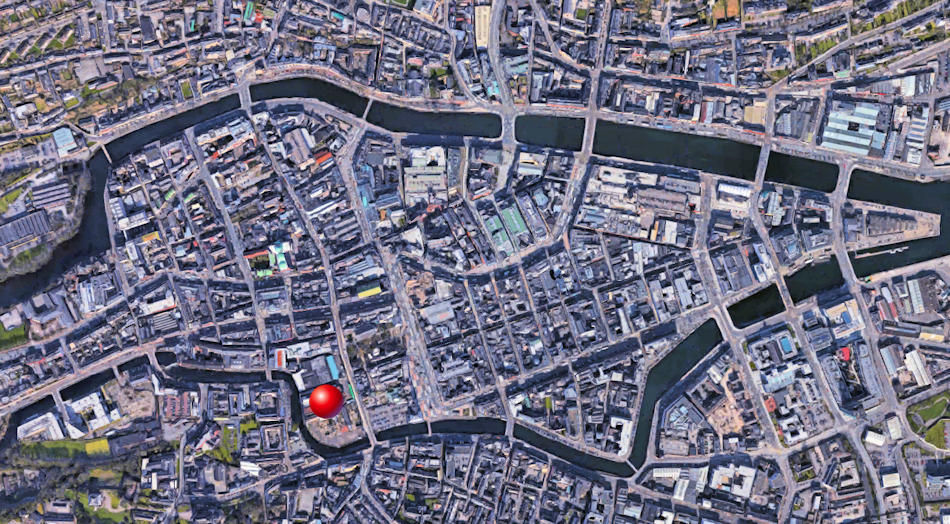 Testing was undertaken to accompany a planning application at the former Beamish & Crawford Brewery site at South Main Street, Cork. The site lies within the zone of archaeological potential for Cork city (CO074–122), which includes the medieval historic core (walled city, CO074–034/01). The city wall (CO074–34/02) lies within the zone and the southern and western boundary of the site under review. South Gate Castle/Gatehouse and St Laurence’s Church/Chapel (CO074–034/11) also lie within the boundary of the site. The site lies in close proximity to several other historic sites and monuments within the walled city: South Gate Bridge (CO074–34/12), Holy Trinity Christ Church and graveyard (CO074–034/08, 09). Nearby outside the city walls stand Elizabeth Fort (CO074–03901), encompassing the site of St Mary Del Nar/St Michael’s Church (CO074–039/02), St Finbarre’s Cathedral (CO074–03802), site of a round tower, east of a cathedral (CO074–03903), a hospital, associated with St Finbarre’s Cathedral (074–03804), the Dominican Priory of St Mary’s of the Isle (CO074–037) as well as the possible site of a leper hospital and associated burial-ground.

The testing was undertaken over a three-week period in June/July 2010. A digital survey of the location of all the trenches and of all the significant structural features exposed within the trenches was undertaken. The trenches were only excavated to depths at which undisturbed archaeological strata were encountered (especially Trenches 16–18 where undisturbed strata were reached at depths of c. 1.5m below the surface. In trenches 13, 14A, 14, 15, 19, 20 and 23, partially disturbed medieval strata underlay extensive modern disturbance at depth varying from 1.5m to 2.5m. In Trenches 1 and 2, post-medieval stone features were allowed to remain in situ; however, exploratory deeper cuttings indicated that the post-medieval features overlay river gravel and silts. Elsewhere on the site 19th-century cellars and modern foundations cut deep into the ground and excavation to depths of 2.8–3m revealed disturbed ground overlay naturally deposited silts and gravels. All the trenches were backfilled and the surfaces reinstated following completion of the testing.

A report on the testing containing all the details of the trenches was compiled immediately following on-site work and was used to inform the design process. With the availability of this information, basement components were largely omitted from the areas of greatest archaeological sensitivity.

Trenches 1 and 2 revealed stone-built features of post-medieval to early modern date (17th to mid-19th century). The majority of the features in Trench 1 relate to properties recorded in the map of 1778. Stone-lined wells were a common feature of private backyards as well as areas of public access in Cork from the 17th to the 19th century. Piped water was not supplied in Cork city until the latter half of the 18th century and the Cork pipe water company was established in 1768. Wooden water pipes could not withstand strong internal pressure and were used mainly to convey water from the reservoirs to the public standpipes, fountains and street cistern from which people drew their supply. The carved stone drain covers were a feature of 18th- and 19th-century yards and alleys. The slipway in Trench 2 appears to be the cartographically recorded slipway which formed the southwards extension from Morgan’s Lane. A map of 1778 records a slipway leading to the south from Morgan’s Lane (at that time know as Webber’s Lane) (Johnson 2002, 37–38). The slipway is also shown on a map of 1868 and on an illustration of 1796.

Trenches 3–11 revealed disturbance of the ground mostly occasioned by 19th-century brewery cellars, all of which are recorded on in 19th-century maps of the Beamish and Crawford Brewery. Of particular note was a stone wall and associated cambered gully recorded in Trench 7 where large concentrations of broken glass and bitumen are indicative of the former use in the brewery; namely as tar-rooms (associated with coopering) and the bottling plant.

Trenches 9 and 11 were excavated through 20th-century reinforced concrete vat foundations and these foundations were cut into the ground to depths of at least 1.55m where disturbed ground overlay natural river gravels.

Trenches 13, 14, 14A, 15 and 23, were excavated in the south-eastern part of Zone C; in this area the ground was generally disturbed to depths of 1.4m to 1.5m but areas of undisturbed medieval strata lay beneath this, generally at depths of 1.9m to 2.15m. Of particular note is an east–west stone wall excavated in Trench 13. This wall stood to within 0.45m of the present ground level; this wall may be part of St Laurence’s Church in the light of a note written on Aher’s map of 1778 which says ‘about this place St Laurence’s Chapel formerly stood’. In the test-trench the wall was exposed to a depth of 1.4m below ground level; the wall was 0.95m wide with an offset footing to the north and south.

Due to restrictions of underground services, standing buildings, etc., Trench 12 was the only trench excavated close to the street frontage at the southern part of the site. Trench 12 was abandoned at 1m deep due to the restricted width of the trench and the occurrence of reinforced concrete at a depth below 1m.

Trenches 16–18, excavated close to the South Main Street frontage in Zone A, all revealed medieval material at depths below 1m and well-preserved organic strata below 1.5m. The foundations of east–west stone-built walls were also recorded and these appear to be of late medieval to post-medieval date (c. 15th–17th century). The material is comparable to that excavated in nearby Hanover Street (South Main Street frontage) by Cleary (Excavations in Cork City 1984–2000, 41–44) and by Dermot Twohig on the opposite side of South Main Street in the 1970s (Cleary et al. 1997).

Trenches 19–22, excavated within the modern warehouse, revealed extensive disturbance by 19th-century cellars, many of which are recorded on the brewery maps as coal stores. Many large stone-built walls of these cellars survive. In Trenches 19 and 21 there are indications that medieval organic strata survive at depths of 1.4m to 2.75m below present ground level. These layers are mostly organic silts containing oyster shells, a type of material likely to represent dumping in the backyards of medieval street-fronting properties. 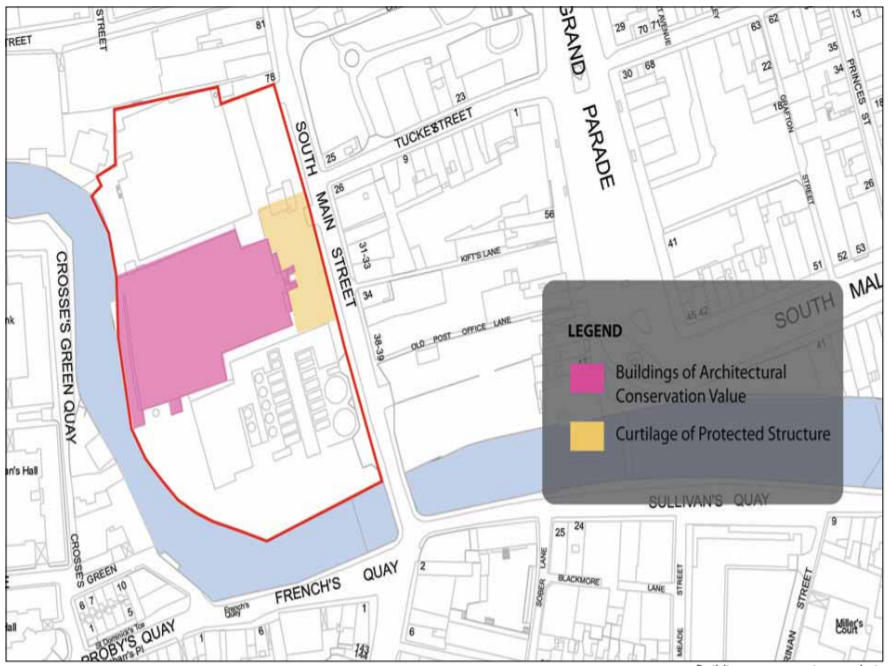 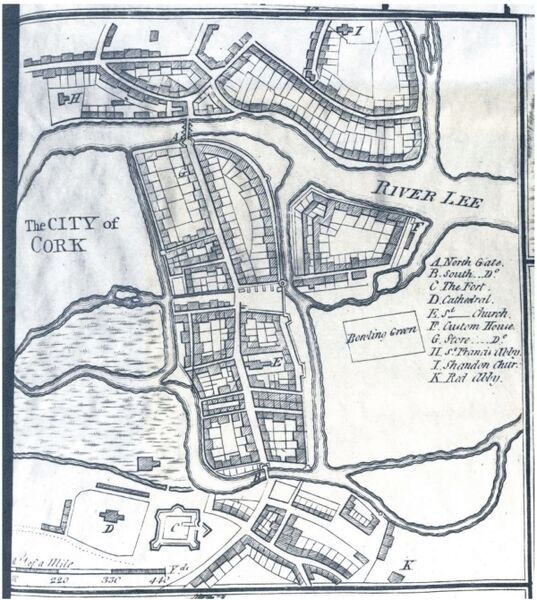 A map of Cork from circa 1690
image: About Ireland 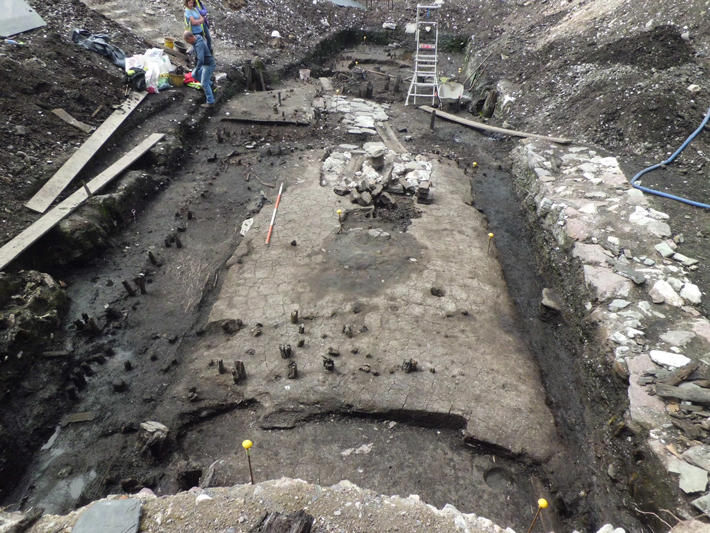 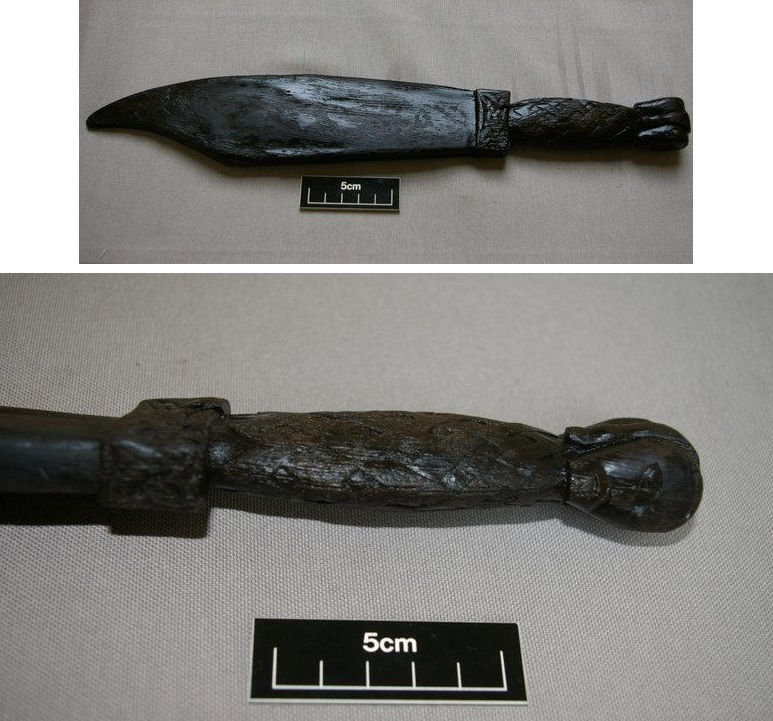