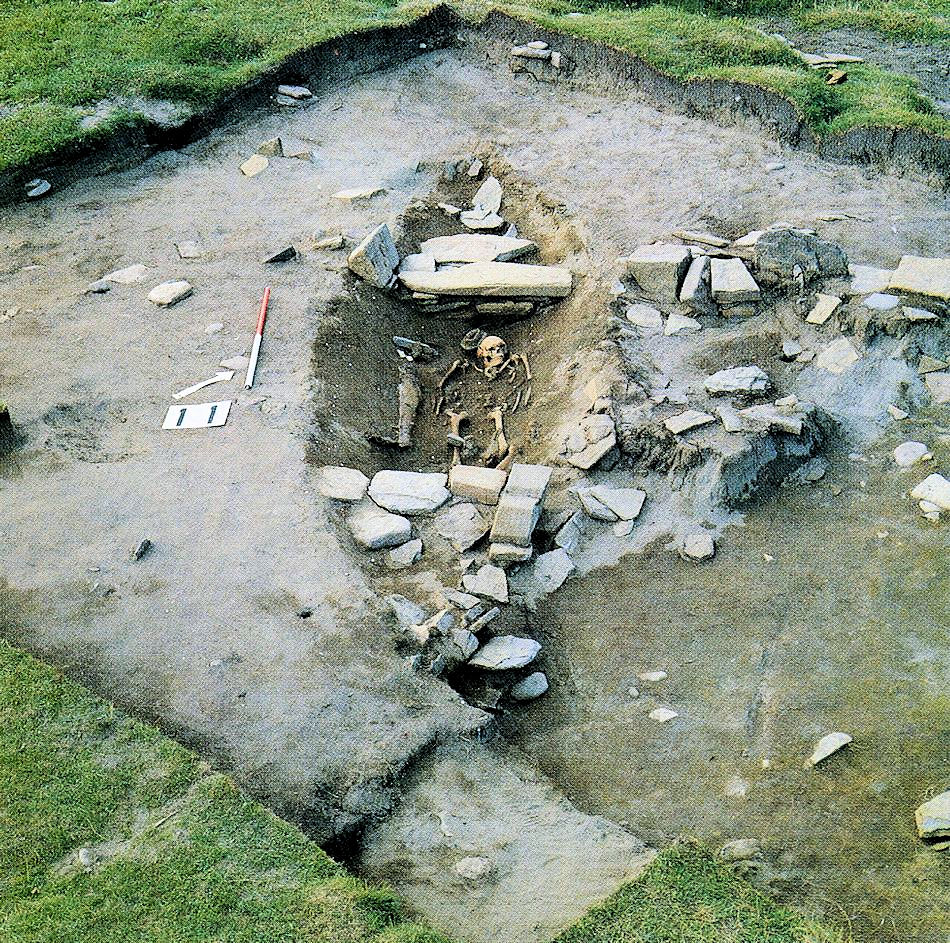 Boat Grave Westness, Rousay
(click on the image to enlarge)

Excavations at Westness, Rousay revealed an ealier Pictish cemetery with a subsequent Viking cemetery which included two boat burials. A noust, or boat house was found to the east of the cemetery.

At the end of October 1963 a Viking woman’s grave was found whilst digging a hole to bury a cow. The site was on a low promontory on the SW side of the island, probably near where two Viking graves were found in 1826.

The farm manager recovered two early-mid 9th Century tortoise brooches, a zoomorphic Celtic brooch datable to c. 750 A D, a bronze mount and some human bones, which were sent to the National Museum of Antiquities of Scotland (NMAS) by the land-owners, Mr and Mrs Scarth. Further investigation of the site on behalf of the museum showed that the grave had been entirely disturbed, but the rest of the skeleton and part of a baby’s skeleton, about 40 beads, a bone comb, fragments of a bronze bowl, other bronze mounts, and pieces of iron implements were recovered. The sides of the grave of which there were no surface indications, had probably been built of slabs laid horizontally.

The excavation of the Viking site at Westness by the Norsk Arkeologisk Selskap revealed a complete grave of a Viking warrior.

The excavation of the Viking site at Westness by the Norsk Arkeologisk Selskap revealed a complete grave of a Viking warrior.

Further excavation of this Viking cemetery has exposed 32 graves as well as earlier foundations. Excavation of a boat-grave produced a male skeleton with weapons and tools. 5 oval graves nearby contained weapons, jewellery and tools, and other graves were of children. C14 dating places the cemetery in the 9th century.

Excavation of the Westness cemetery has revealed both Pictish and Viking graves of varying types, both with and without grave-goods. Radiocarbon assay indicates use from the 7th to the 9th centuries AD and skeletal analysis indicates that the remains comprise the whole community; a wide range of pathological conditions is indicated in a population aged up to fifty and measuring up to 1.7m in height. The graves were not identifiable on the surface but apparently had headstones or similar grave-markers at the time of use; the Vikings evidently respected the graves of the native population.

The Pictish burials were unaccompanied by grave-goods and laid extended in narrow and shallow trench-graves, some of which were wholly or partially slab-lined. The Viking graves were rectangular or oval in form. The oval graves were slab-lined and possibly also slab-covered while the lining-stone behind the head was a taller ‘stemstone’. Grave-goods varied with the status of the individual and included weapons (sword, axe, spear and arrows), shield-bosses, jewellery, tools (including sickles and adzes) and weaving implements.

Two boat-graves (measuring 5.5m and 4.5m in length respectively) were recognised from their rivet-patterns and decayed outline-stains; they were evidently three- or four-strake vessels of faering form and clinkered-oak construction. The boat from grave II had a rowlock of deer antler on the gunwale and a ‘vadbein’ of deer antler for the fishing-line on the other gunwale. In each case the burial was formed by placing the vessel in a hole in the ground and stabilising it externally with stones and clay before forming a midships burial-chamber by infilling the bow and stern with stones. Each boat contained the extended inhumation of a battle-scarred male accompanied by tools and weapons; swords, shields, axes and arrows in each case with a spear in one of them. Both burials contained farming tools (including adze and sickle); one also had a hone and a strike-a-light, and the other a fishing weight and bone comb.

A boat-shaped slab-setting was also found on the edge of the beach; it was evidently unfinished and unused. 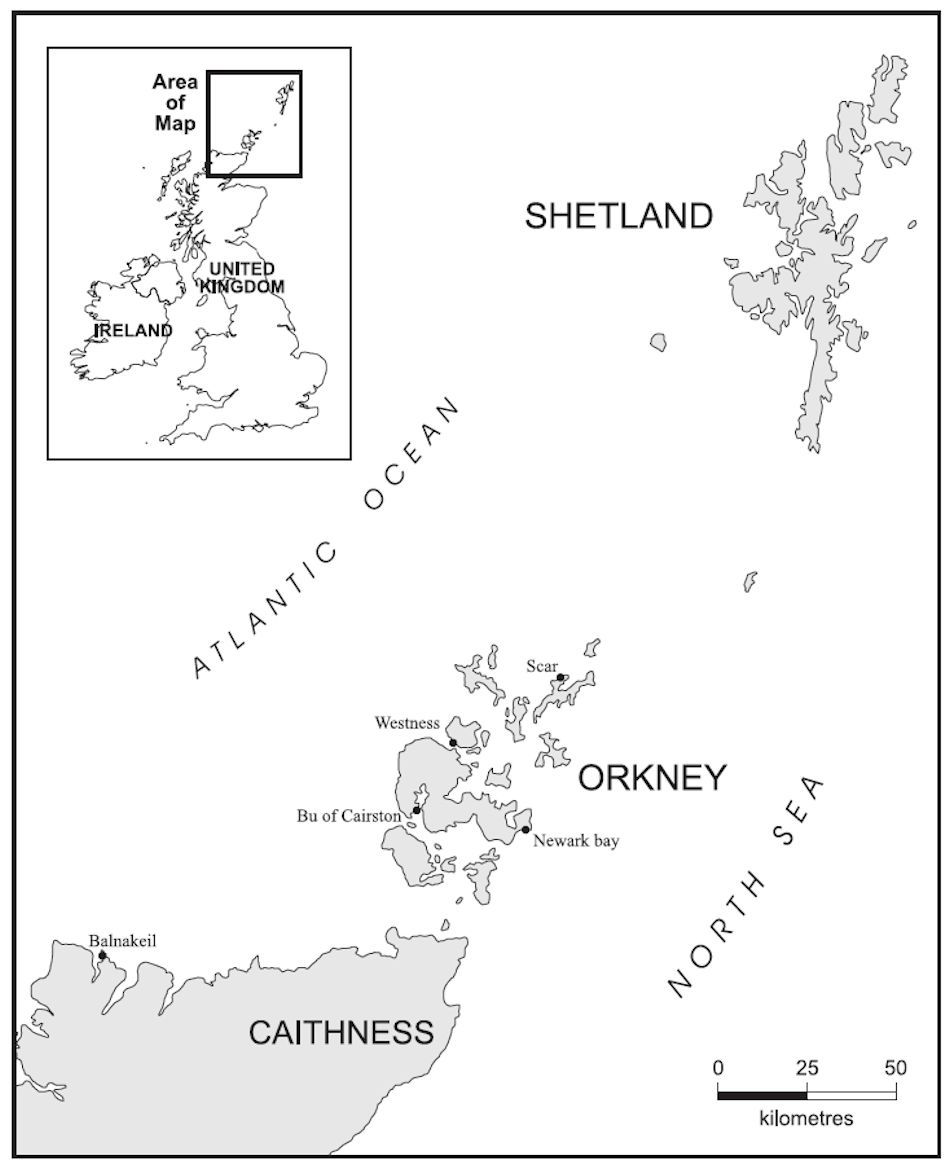 Location map of Westness
(click on the image to enlarge) 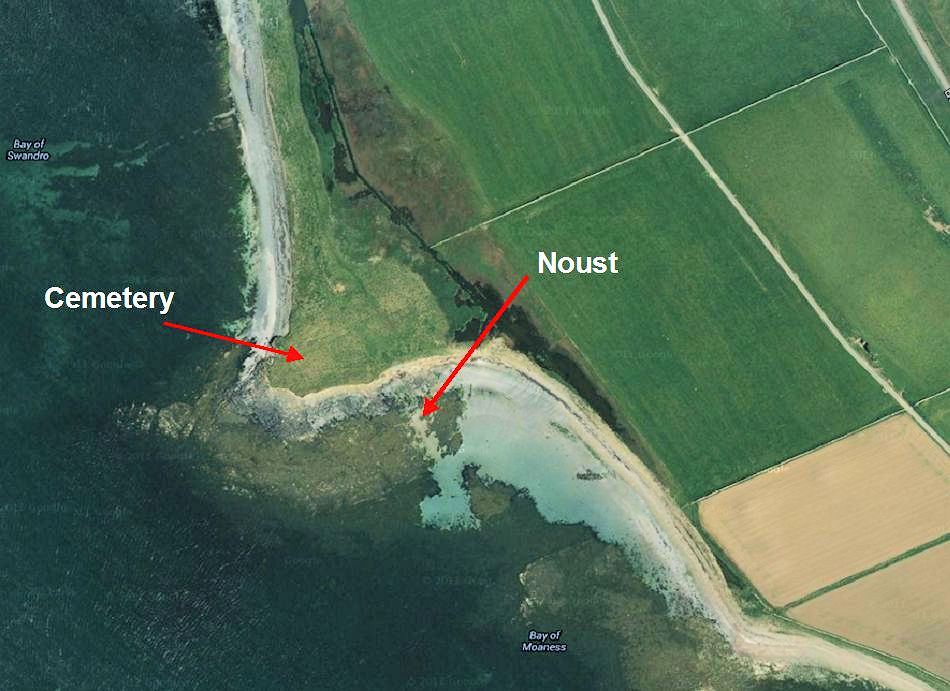 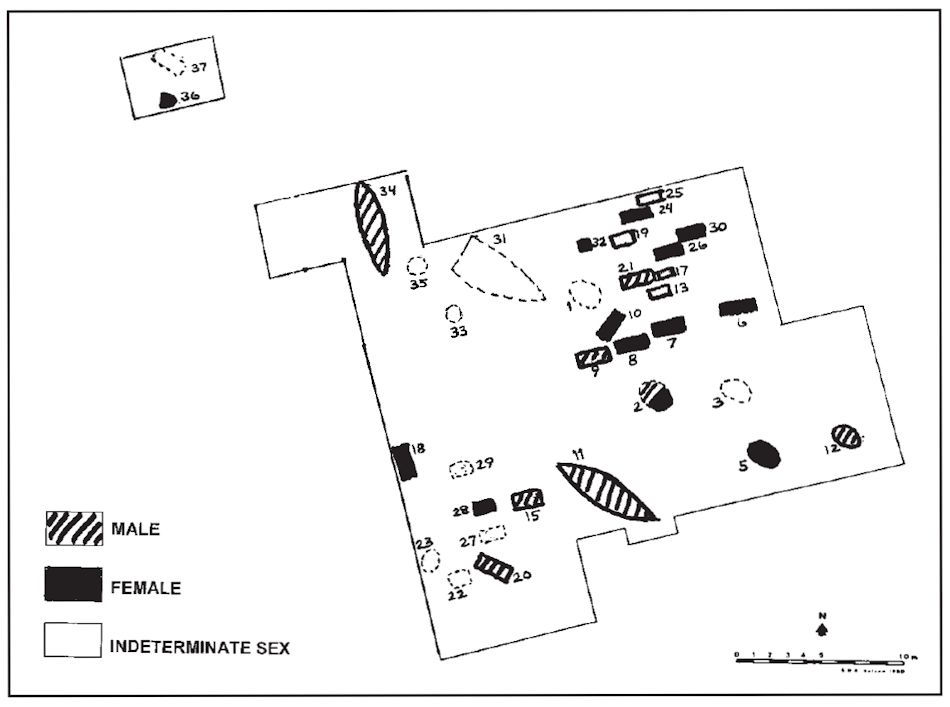 Plan of the excavation
(click on the image to enlarge)